It was only as an adult that I learned that everyone, everywhere did not have Povitica at Christmas.  In Kansas City, where I grew up, not a Christmas went by without Povitica from Strawberry Hill.  It is an Eastern European bread, but to me, it's also a little slice of Christmas in Kansas. Povitica is not like any old loaf of bread because the bread serves merely as a delicate shell for all of the rich, fantastic ingredients contained inside.  Back home, I loved the loaves that came with cream cheese and apples, but my favorite was always the original - cinnamon walnut.

This was one of those baking challenges that I would only undertake here in Thailand where we cannot simply order our Povitica shipped directly to our door from Strawberry Hill.  Nevertheless, it was not nearly as daunting as I thought it might be.  Okay, so it's not a walk in the park either.  But, the only truly difficult step was getting the dough to be so fantastically thin that it would embody that paper-thin shell, holding all that filling, that I remember from home.

It helped that I found a great recipe, step-by-step instructions, measurements for batches that make four large loaves, two loaves, or even just one (which is what I include below) at the Daring Kitchen.  I didn't even attempt to photograph the entire process, since the pictures provided at that site cannot be beat.  I divided the recipe for one loaf further into four mini loaves so that we could share them with friends tonight as we celebrate the birthday of the King of Thailand.  The loaves came out just as I remember from home, except that Strawberry Hill somehow piles an impossible amount of filling in each one.  Next time I may even push it further and double the filling.  Nevertheless, these tasted like Christmas to me, almost as much as the sight of our little tree and stockings hanging in the background as I baked them. 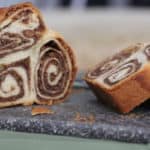 To activate the Yeast:

If you like povitica, you will love this Cinnamon Star Bread.