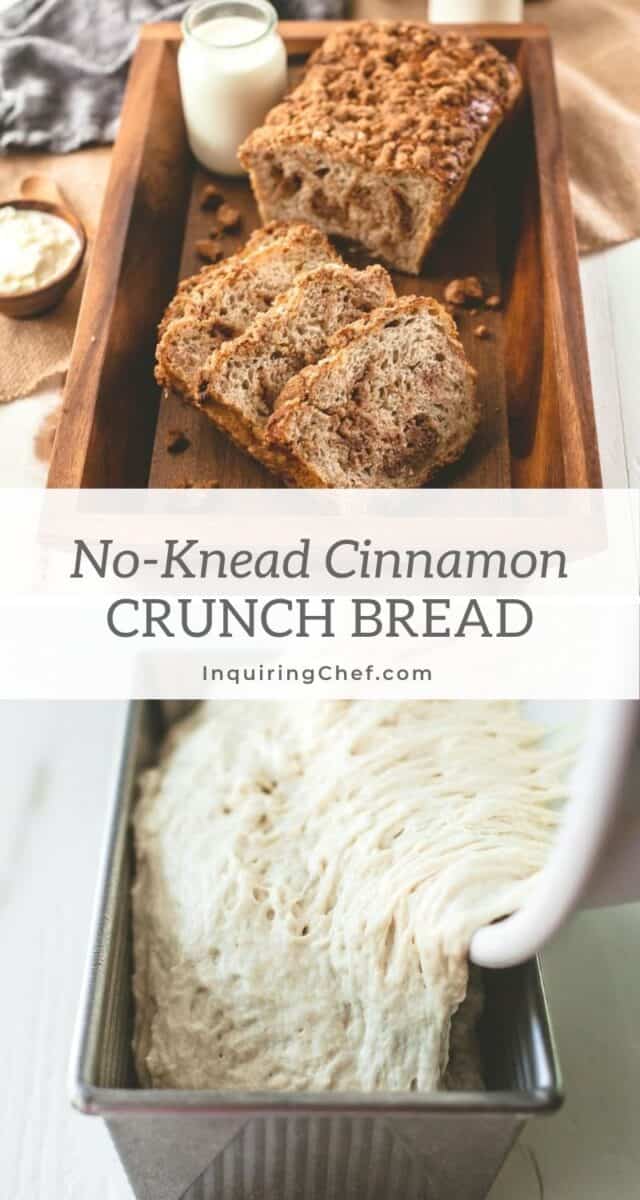 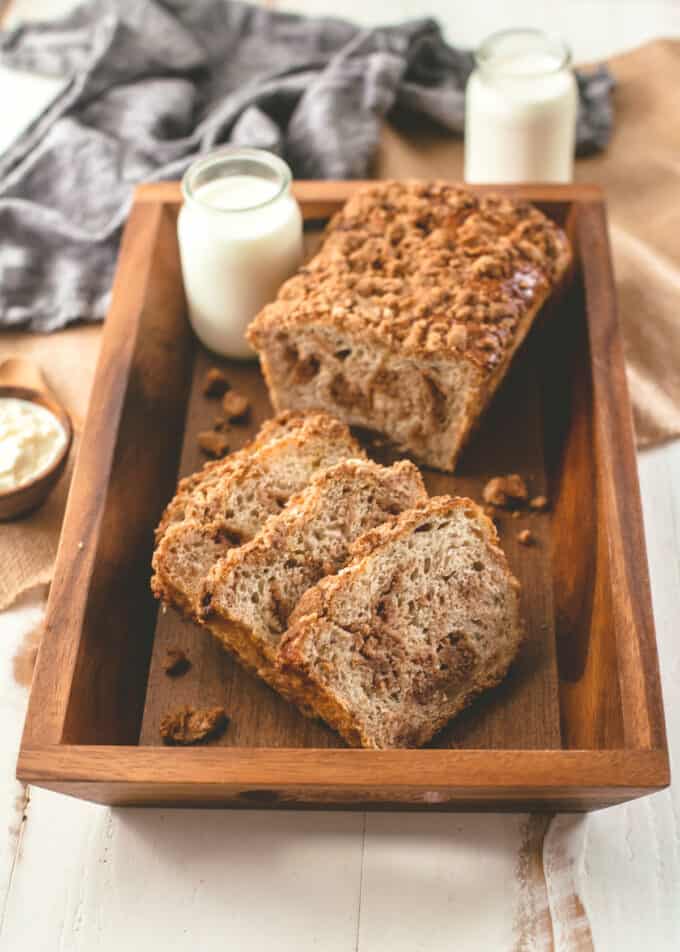 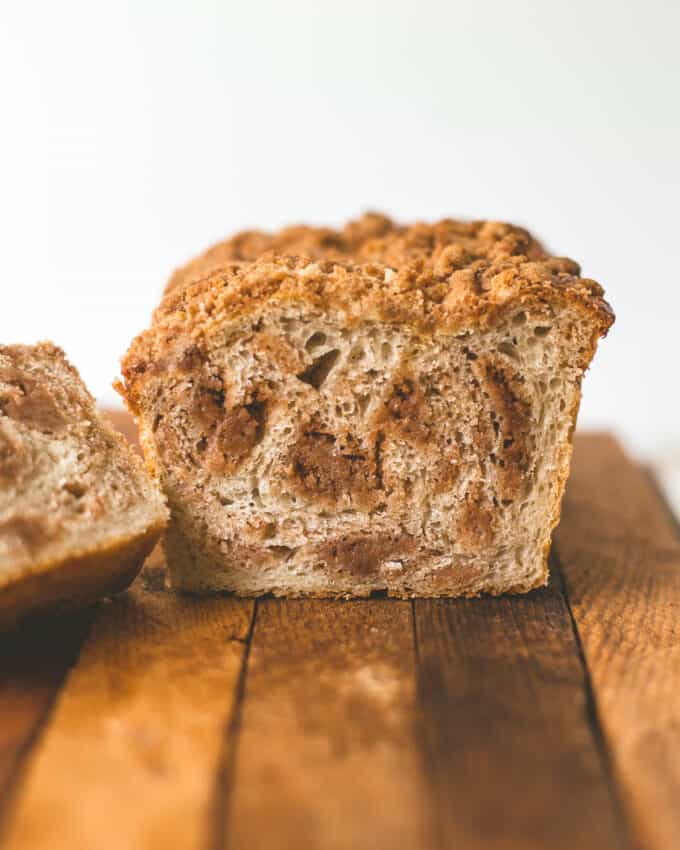 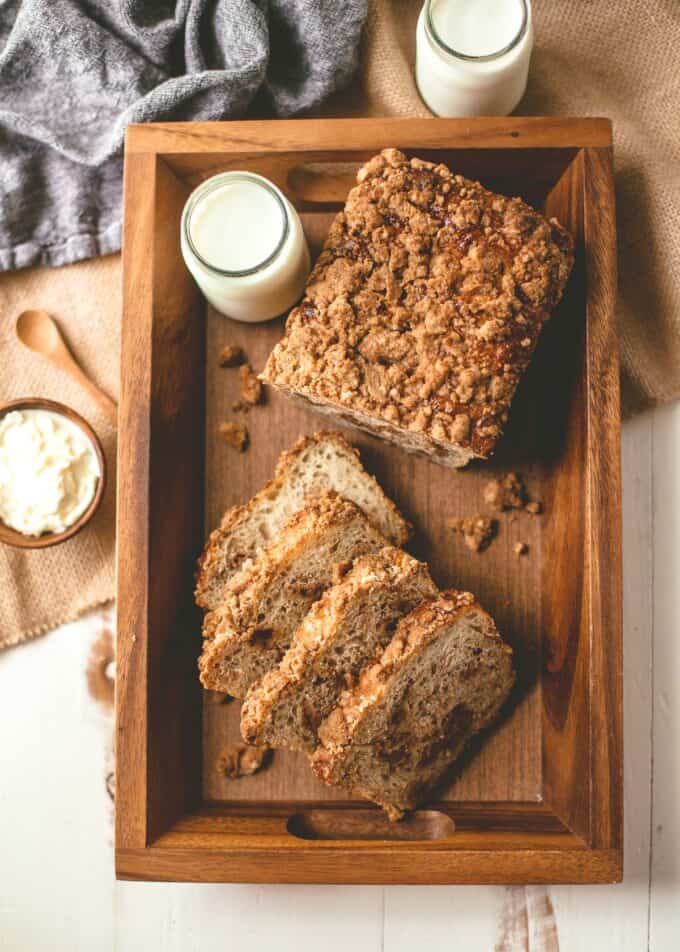 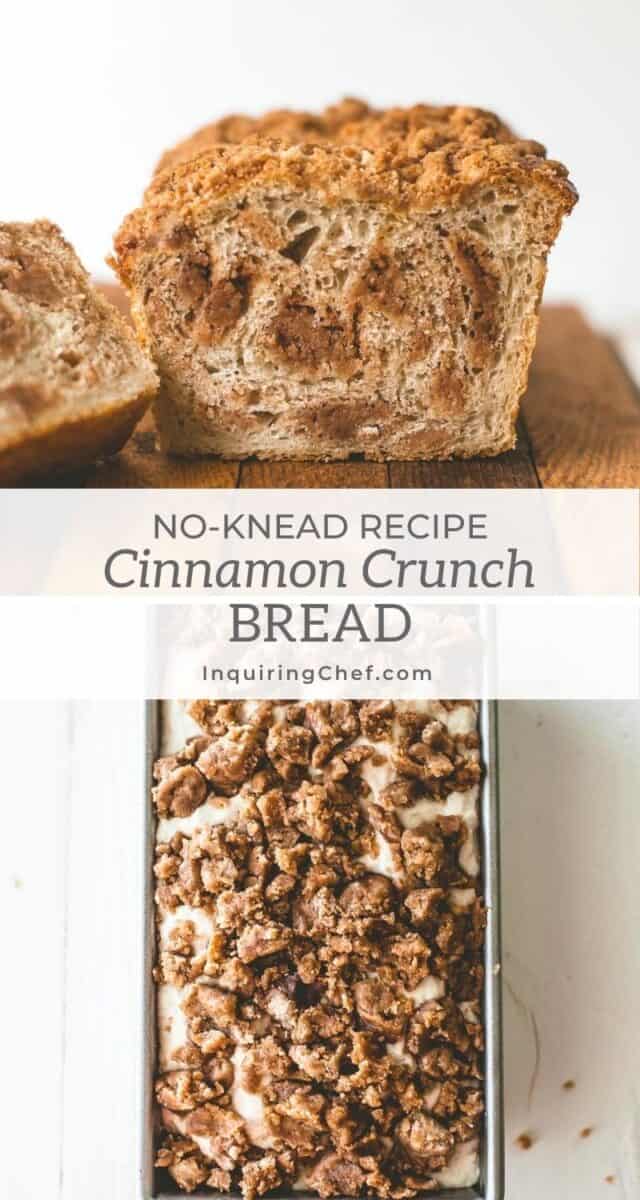 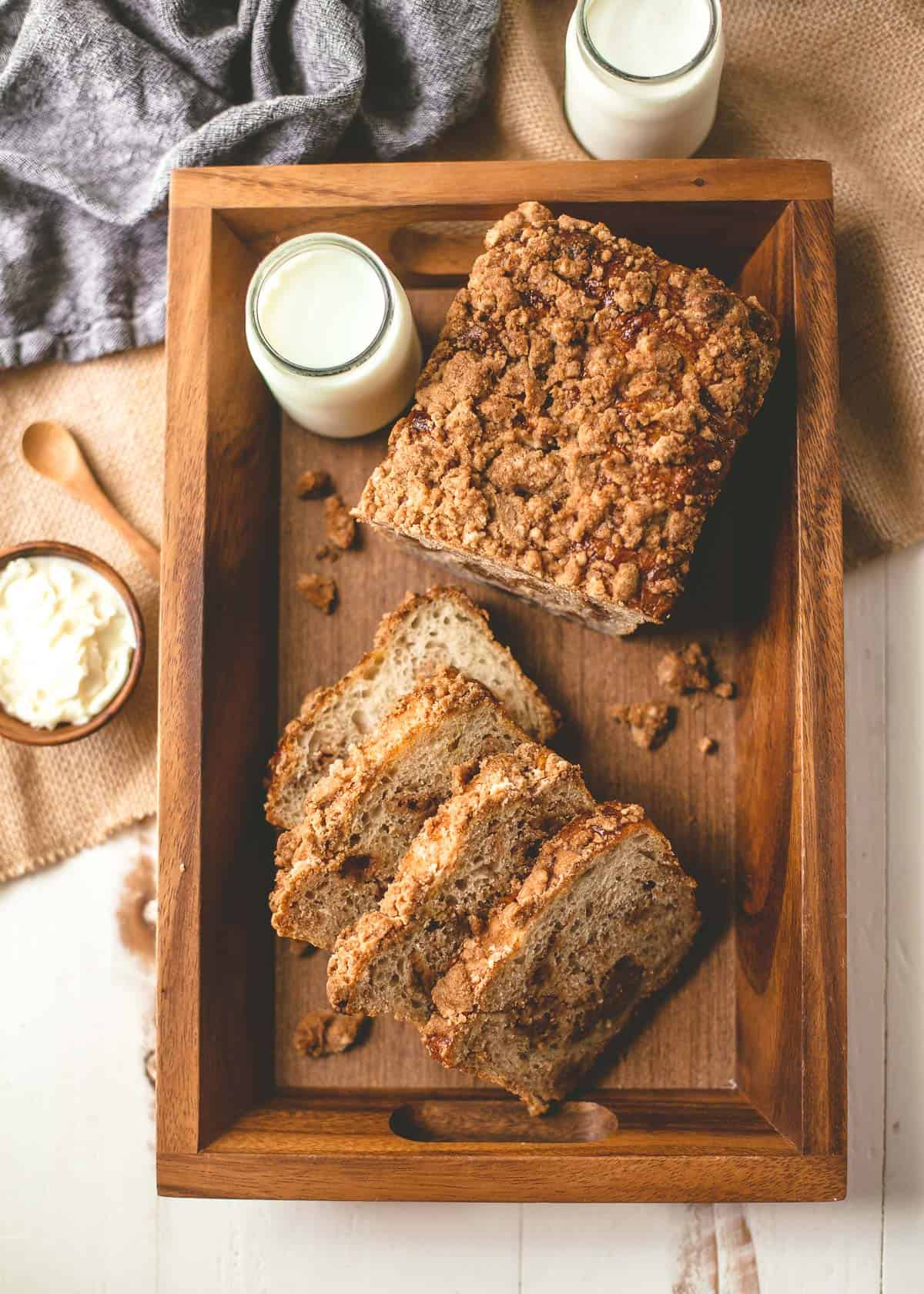 This easy cinnamon crunch bread has buttery bites of cinnamon streusel folded into the dough and sprinkled on top.

Have you heard of serving cinnamon rolls with chili? It’s apparently a Midwestern thing. Since I was born and raised in Kansas, when I heard an entire story about this phenomenon on the radio I was intrigued. I don’t remember eating this savory-sweet combo, but it also didn't sound all that weird. Which makes me think that it may have shown up on a cafeteria menu or two when I was a kid.

I can’t say that I crave a sweet side to go with my latest favorite Slow Cooker Chili, but the idea did get me thinking that I should have a go-to cinnamon bread. The desire for easy, no-fuss baking lead me straight back to my favorite No-Knead Sandwich Bread which, as it turns out, didn’t need much adaptation to be transformed into a sweet loaf of bread that is absolutely packed with cinnamon streusel. 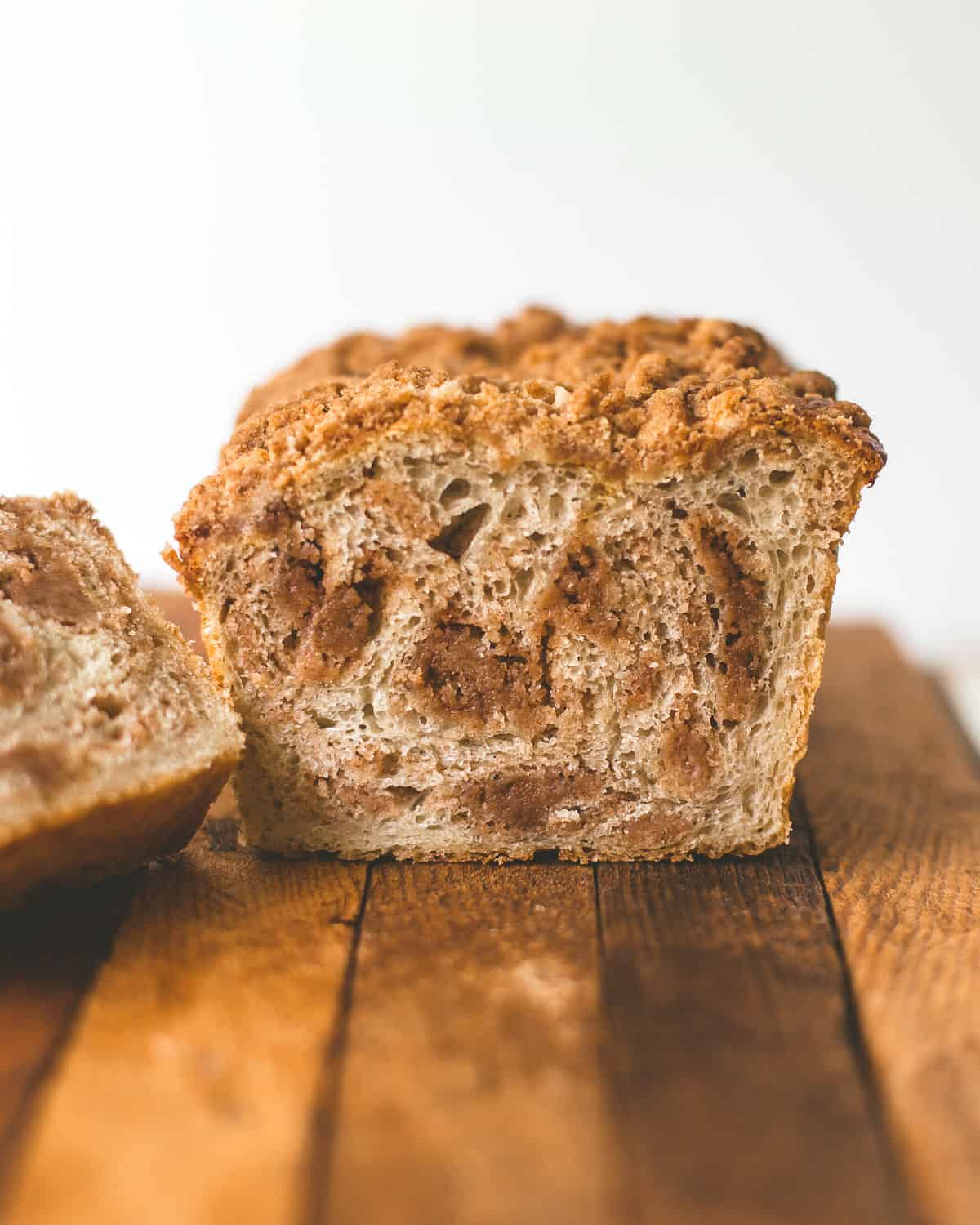 Not only did I fold cinnamon streusel into the bread itself, but I added more streusel on top. Be sure to bake this piled-high bread on a sheet pan in case any of those sweet crumbly cinnamon bites tumble off as it rises.

No needing or special equipment required. Just get out a mixing bowl and let’s make Cinnamon Bread! 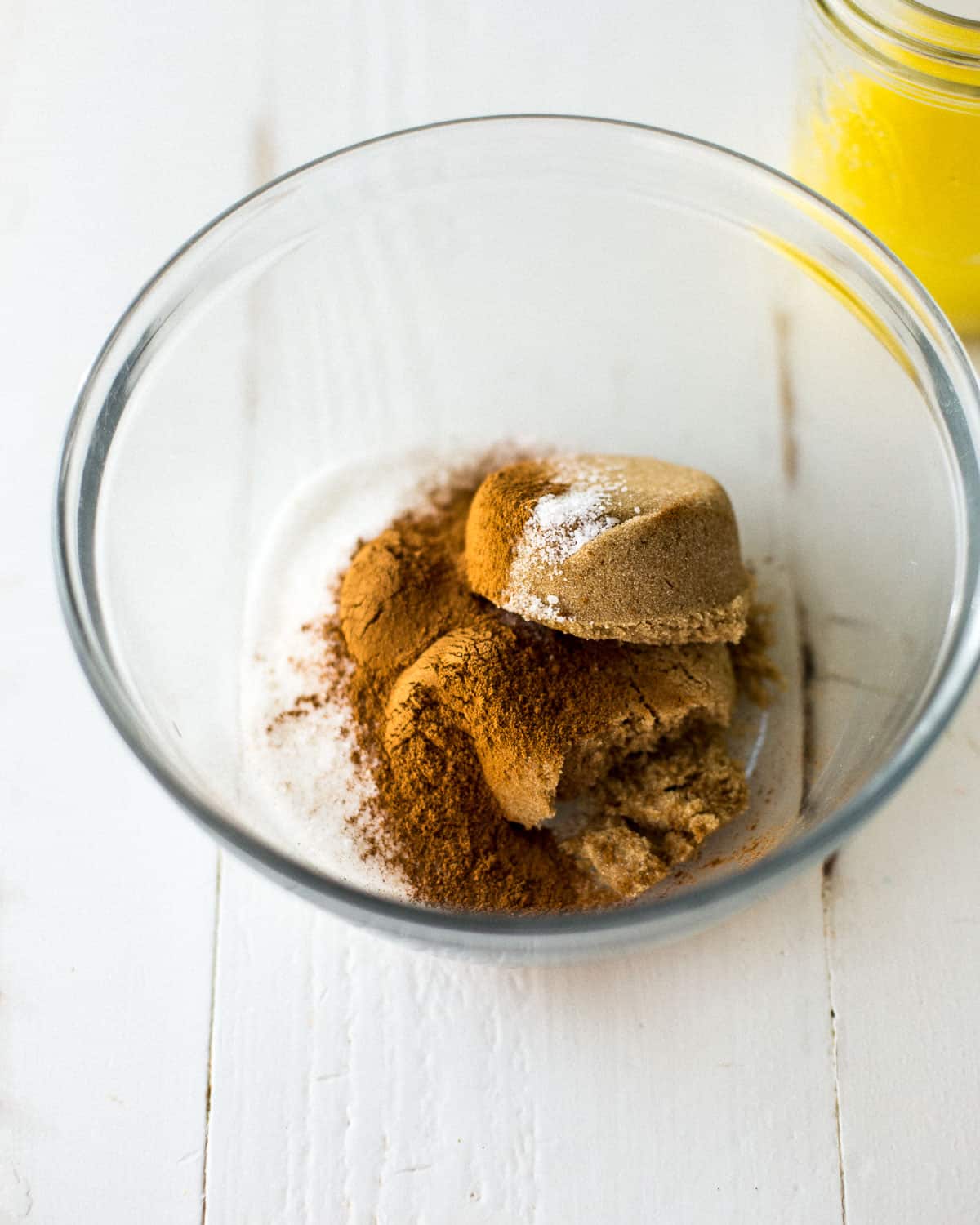 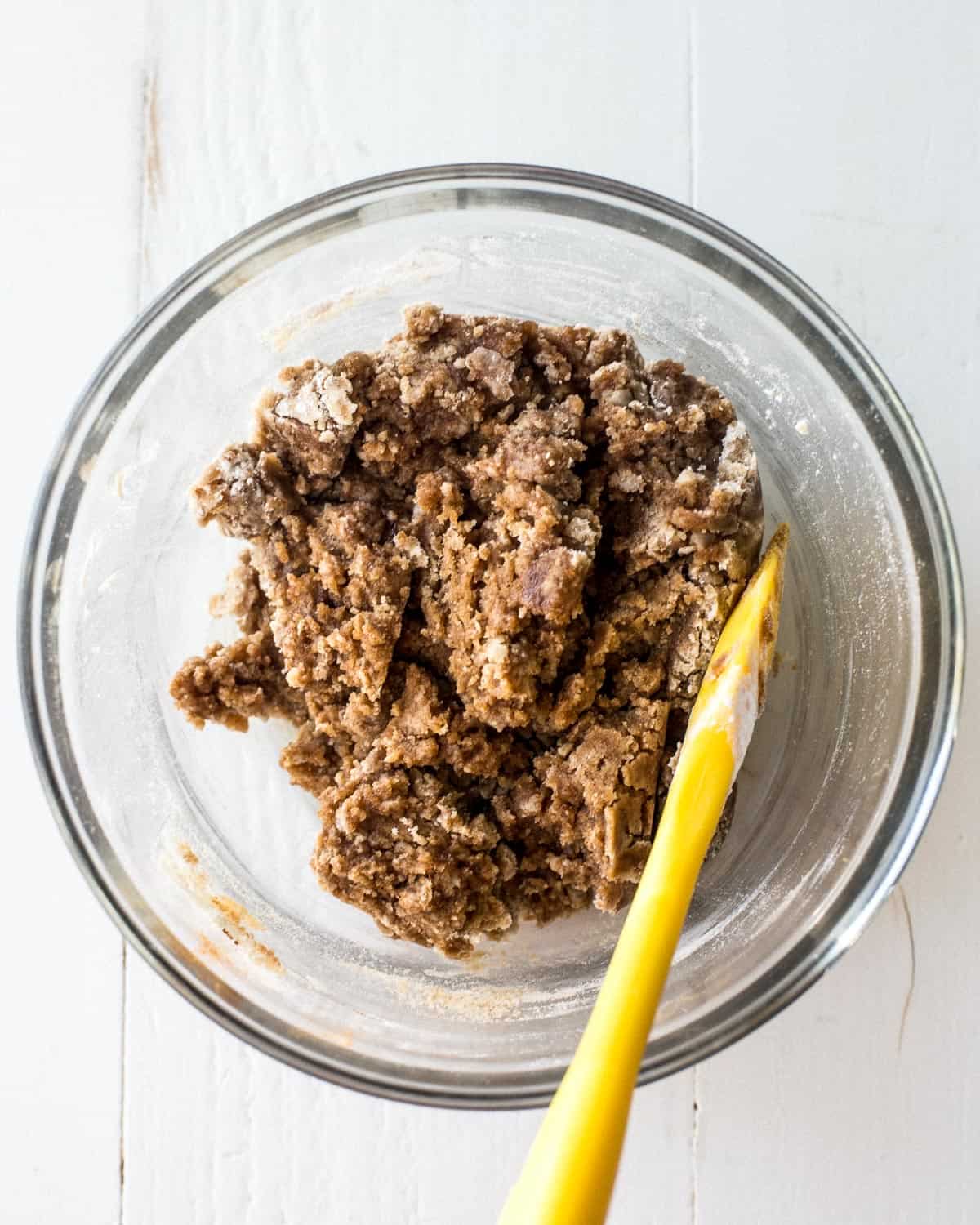 How to Make Cinnamon Streusel

To make cinnamon streusel combine brown sugar, white sugar, ground cinnamon, and a pinch of salt. Stir in melted butter until smooth. Fold in flour until the mixture is dry and holds together in large clumps. The streusel is now ready to fold into cakes and breads or crumble over top of baked goods.

For this cinnamon crunch bread, fold some of the streusel into the bread dough. It will melt into the dough, creating pockets of sweet buttery cinnamon. Add extra streusel on top to create the cinnamon crunch topping which will turn golden and crumbly as the bread bakes. 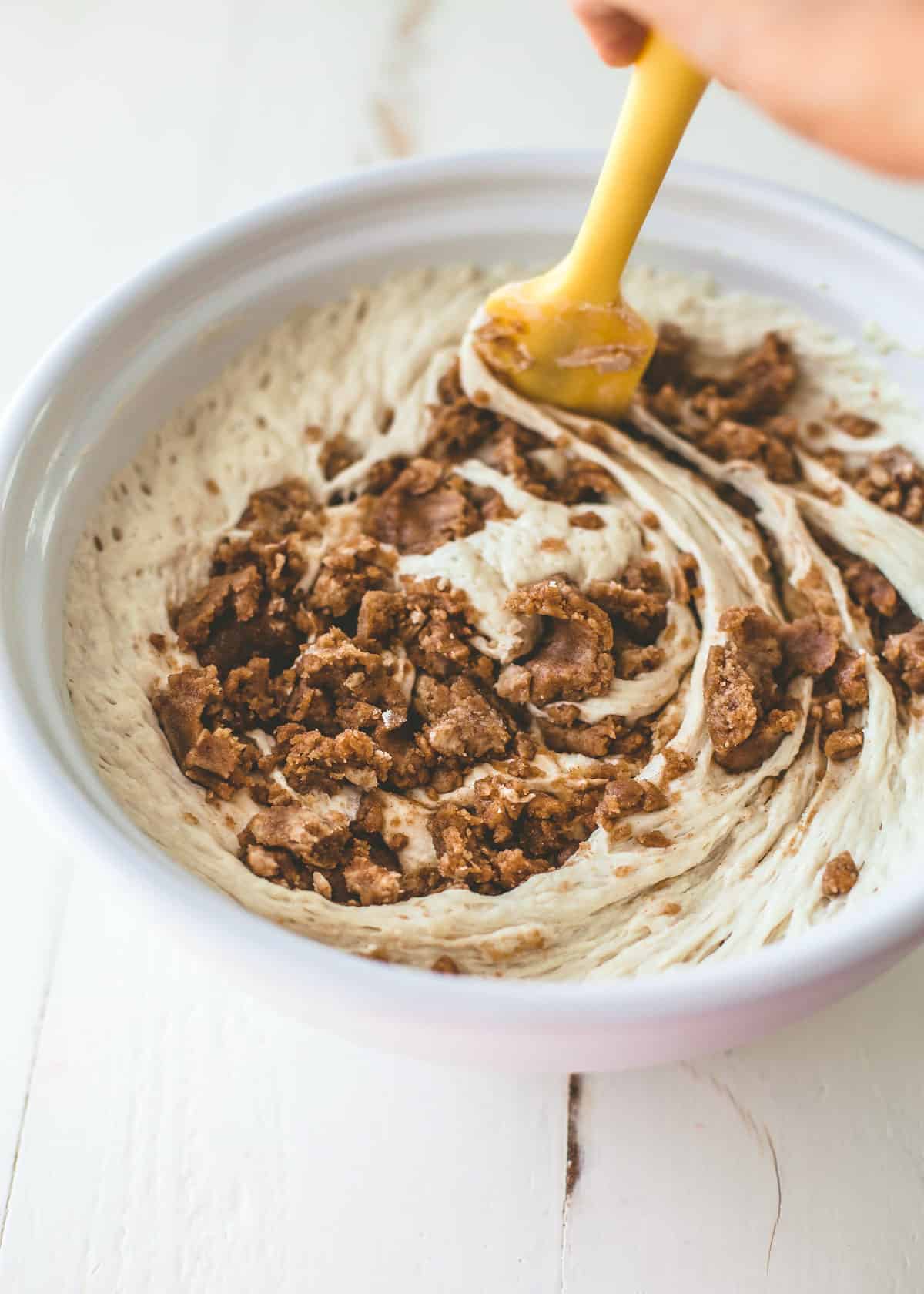 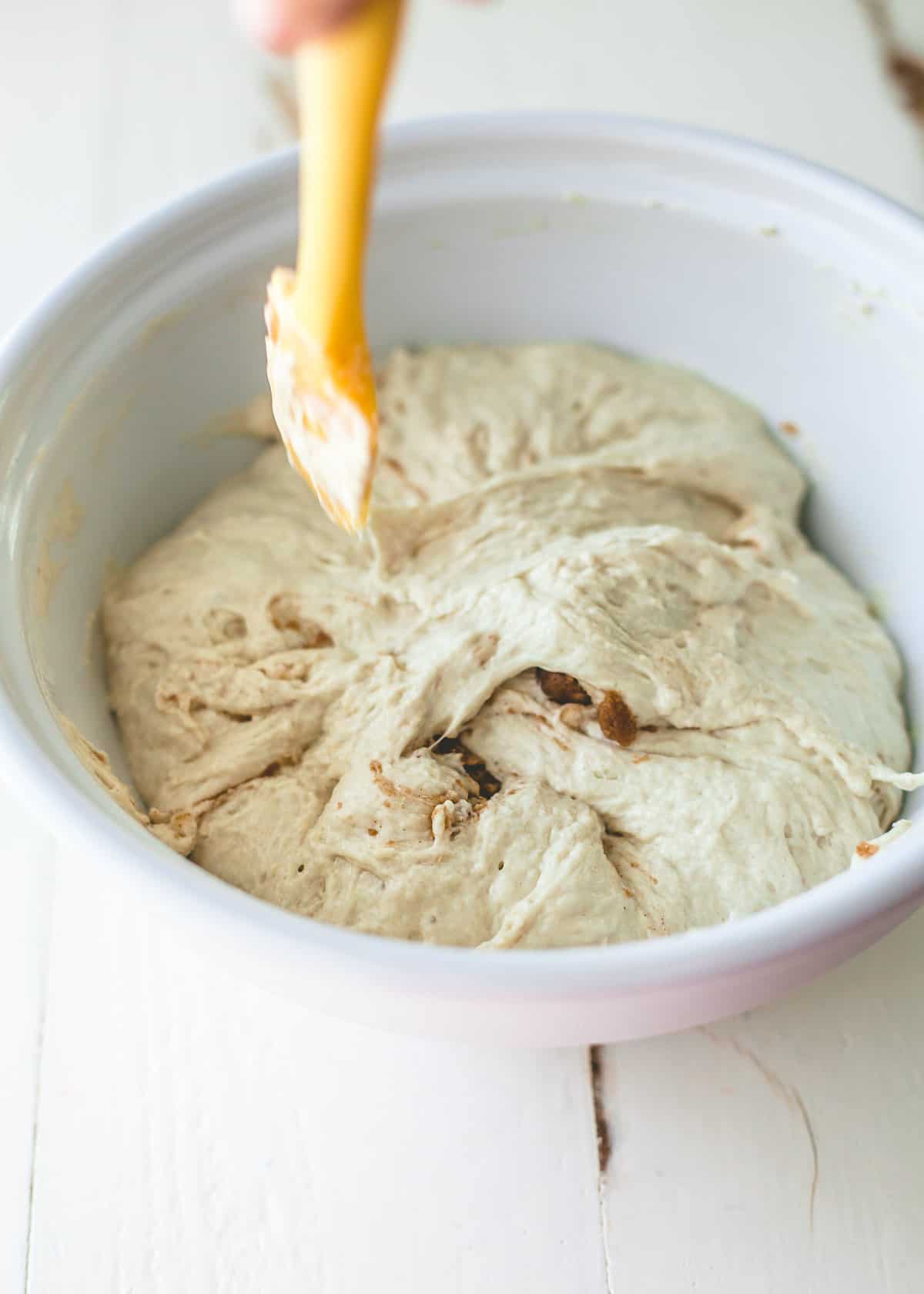 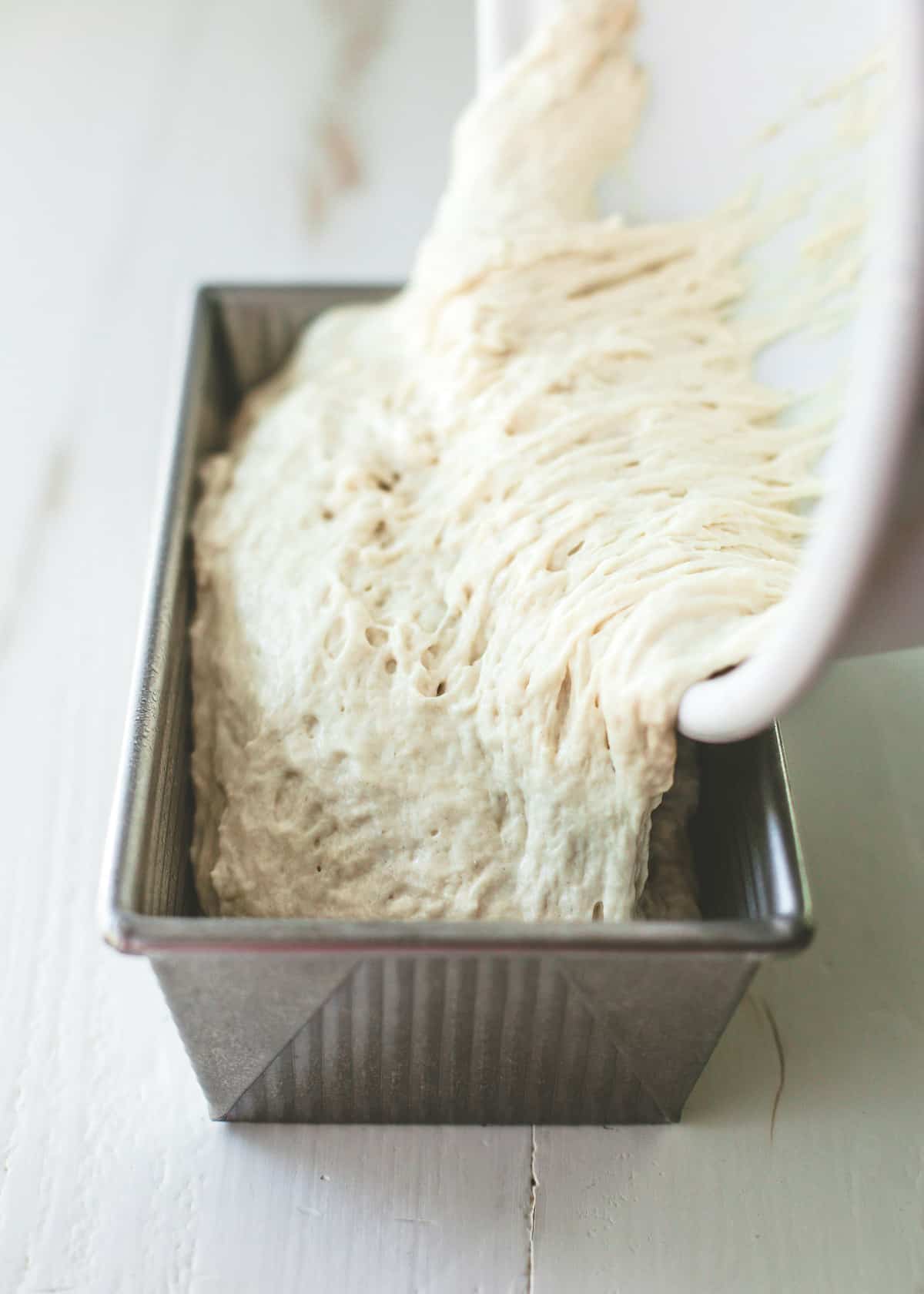 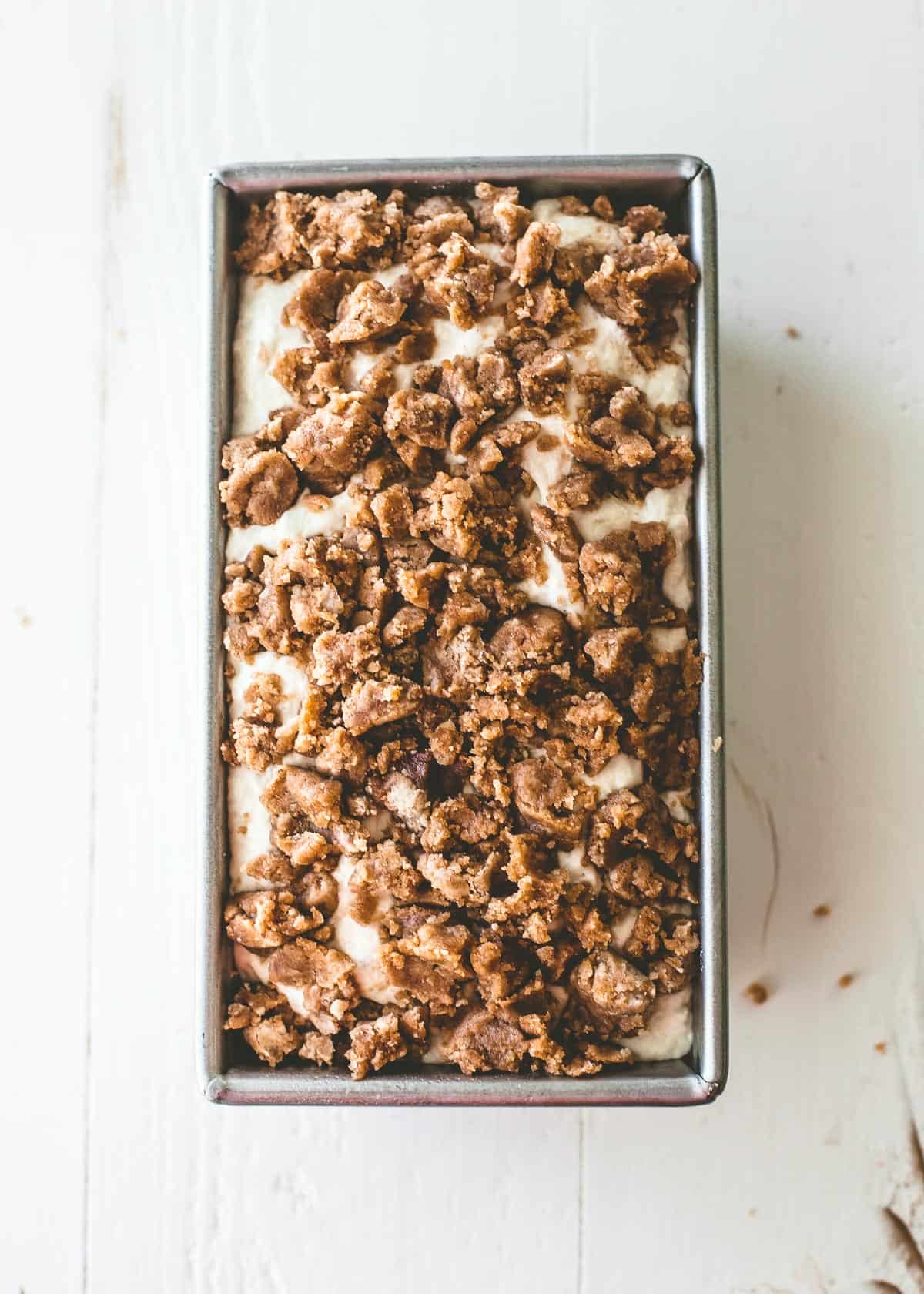 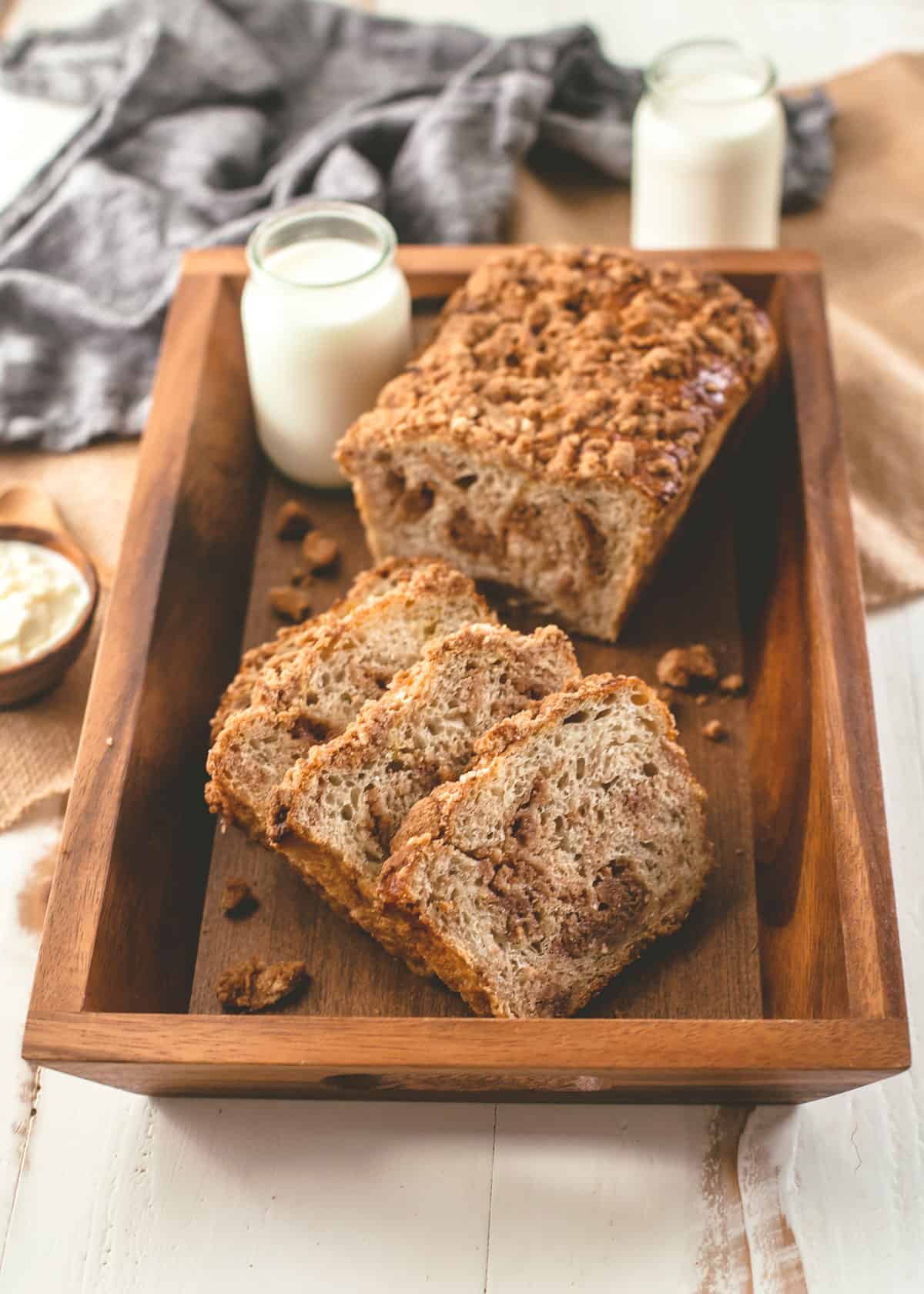 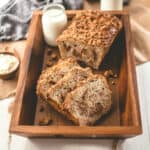 Yeast - Be sure to get yeast labeled as Fast Acting, Instant, Quick-Rise, Bread Machine, or RapidRise - any of these will work. Do NOT use “Active Dry Yeast” in this recipe; it needs to be dissolved in water before using and requires different rise times. Water - Check the label on the brand of yeast you use for the recommended water temperature. Water that is too hot will kill the yeast, water that is too cool will not “activate” it.  Storing Bread - Sliced bread can be stored at room temperature for 2 days. (It's best warmed up in the toaster or oven after the first day.) It can also be sliced and frozen for up to 6 months.  This recipe is adapted from No-Knead Sandwich Bread.