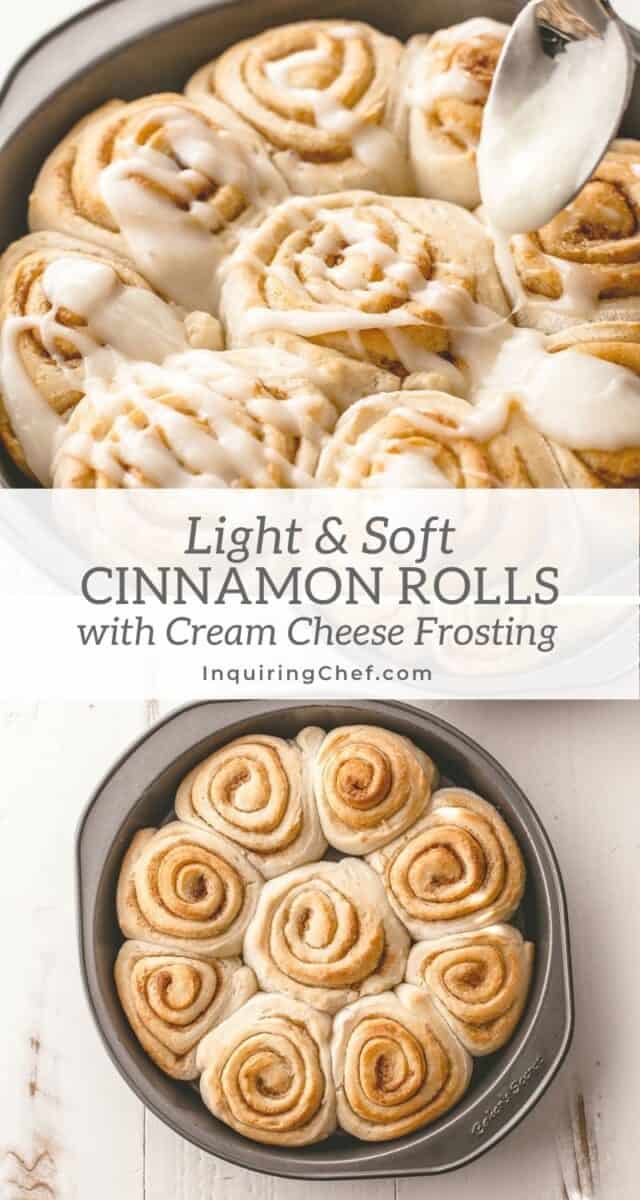 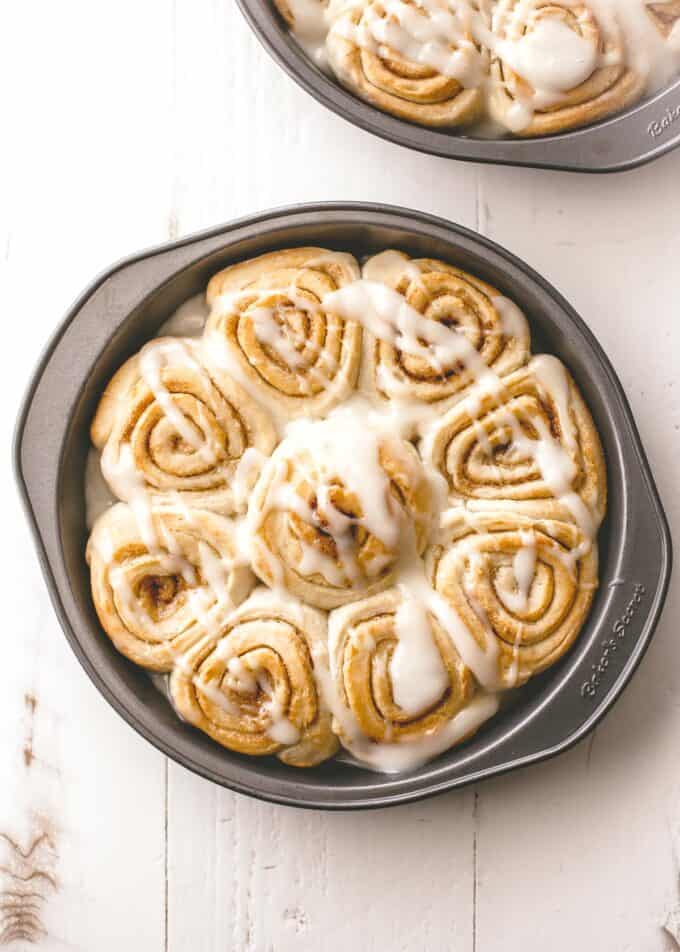 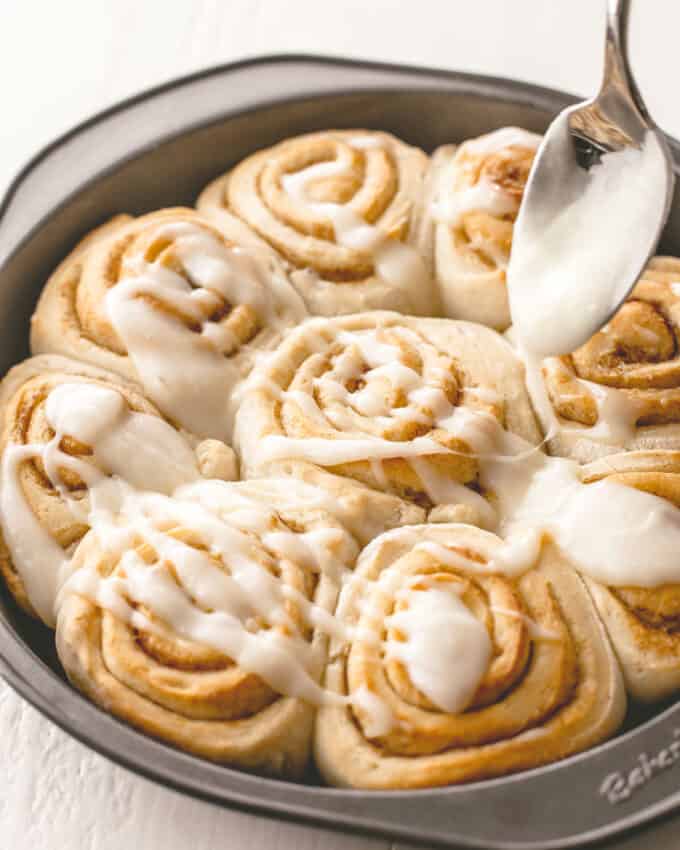 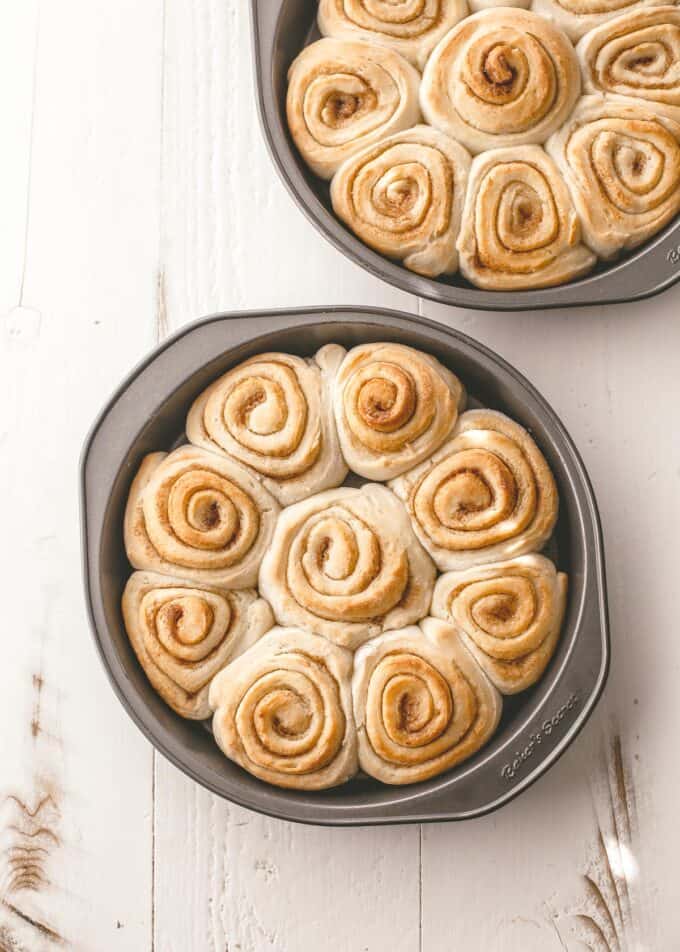 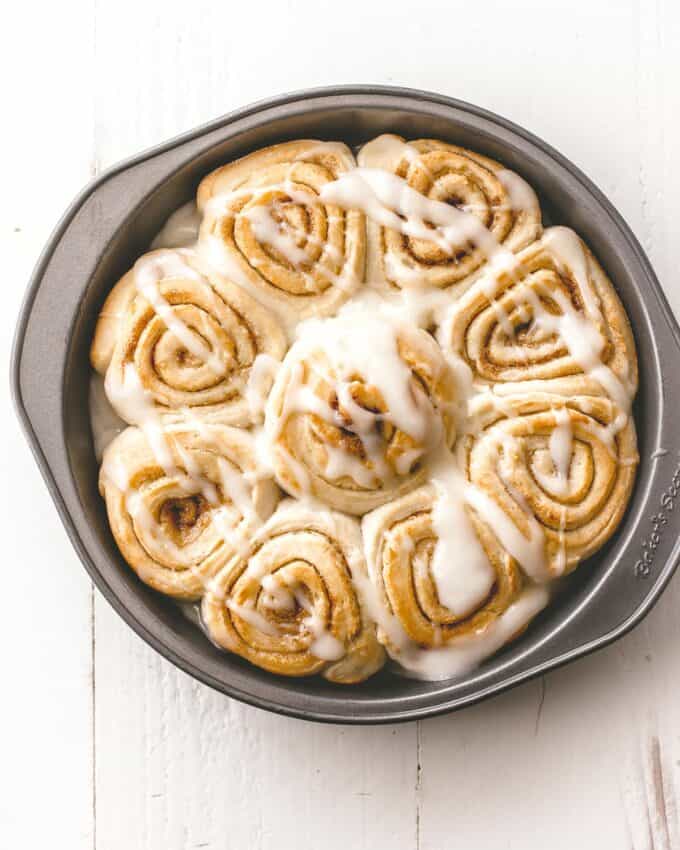 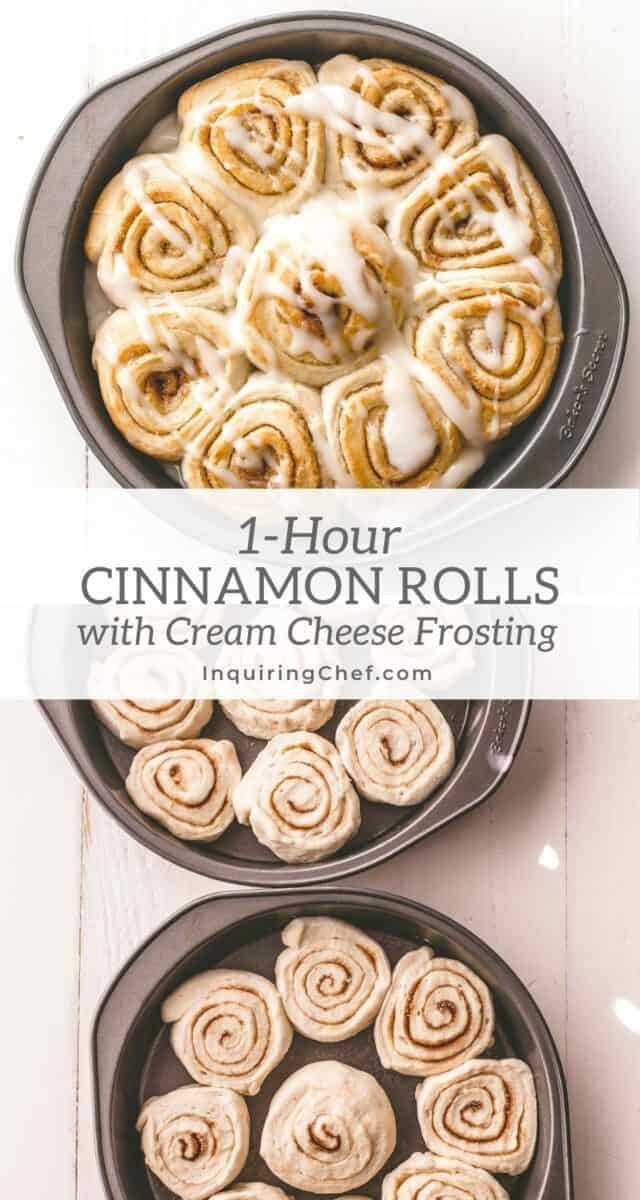 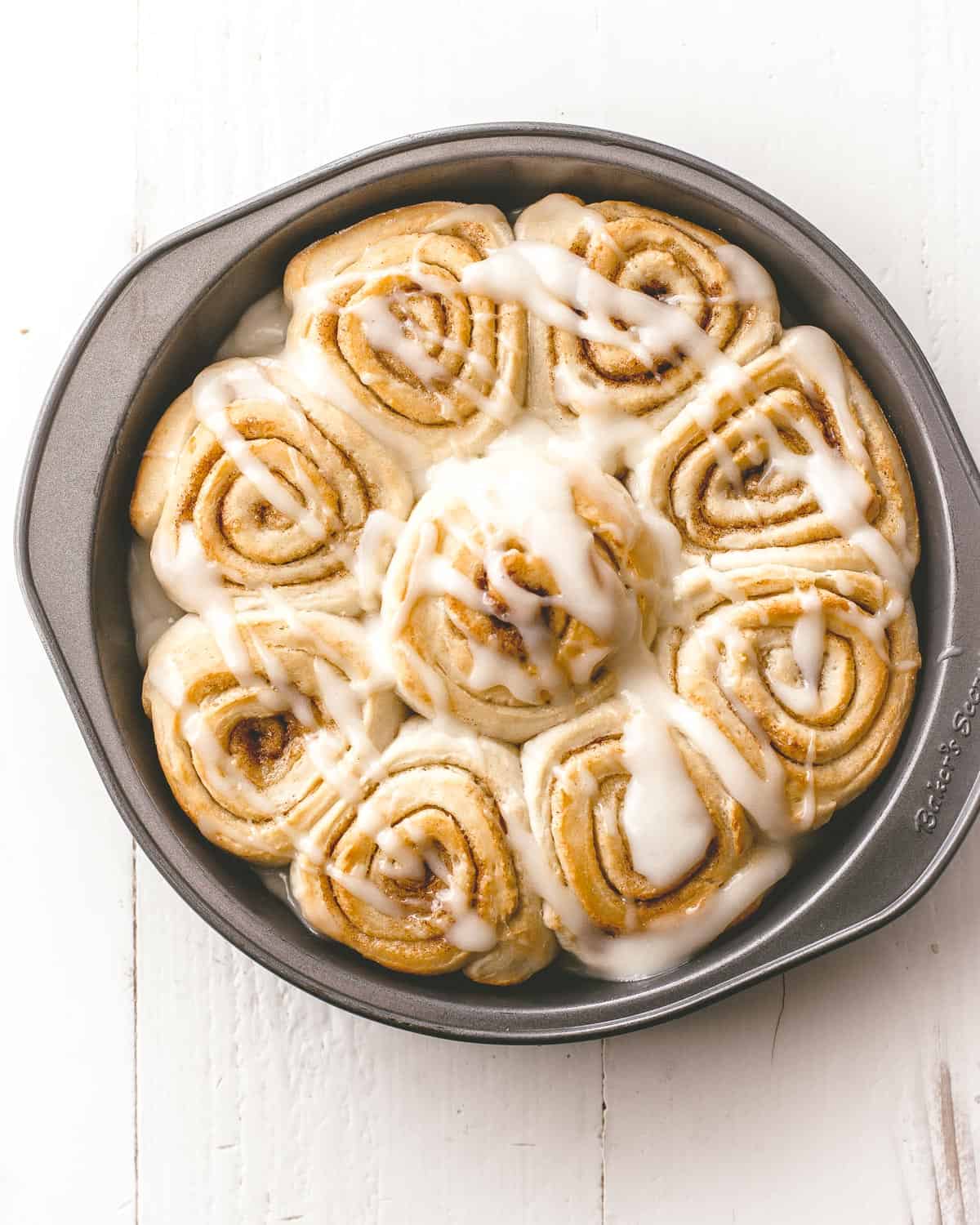 These cinnamon rolls are golden on top, tender in the middle, and topped with cream cheese frosting. And the best part? They can be made in an hour.

I’ve never met a breakfast dish that I didn’t like. Morning foods are my jam (as evidenced by the fact that we have over 50 breakfast and brunch recipes living on the pages of this site), but I’d argue that nothing tops homemade warm-from-the-oven cinnamon rolls. I first shared this recipe for 1 Hour Cinnamon Rolls in 2015 (it’s been updated with new tips and photos to share today).

Since 2015, I’ve tried so many other cinnamon rolls including these, these, and these. All are fantastic and absolutely worth the effort, but I find myself coming back again and again to this 1-hour recipe. The quick rise time is just right to create the light, fluffy rolls that cinnamon roll dreams are made of. You can form the rolls quickly and without being too precise, and they still seem to bake up into a beautiful pan of golden rolls all topped with creamy just-sweet-enough frosting.

The only change I’ve made to this recipe since it was first published is that I now prefer to bake the rolls in two 8-inch round cake pans (you can also use one 9x13 baking dish). One 8-inch pan makes just enough for our family on a Saturday morning and the second pan can be frozen. If we’re hosting or if we know we’ll want to snack on the rolls all weekend, I go ahead and bake the entire batch. 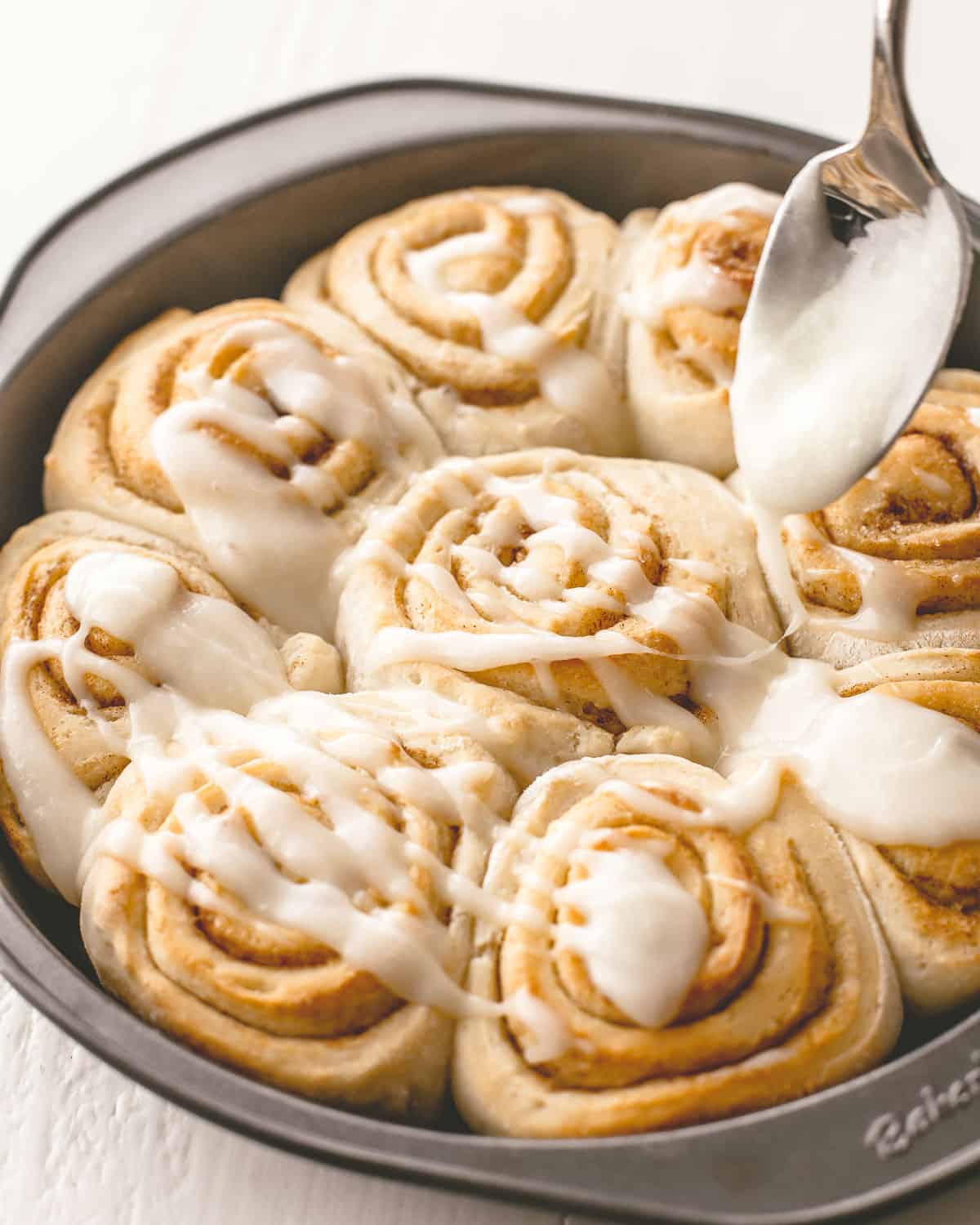 If you have never made cinnamon rolls from scratch, this is a great place to start. It uses my all time favorite 1 hour dough (also seen in the 1 Hour Light and Fluffy Dinner Rolls) which is the easiest dough I’ve ever worked with. I have abused this dough, forgotten about it, made it by hand and in a mixer, and the results are always great.

The secret, especially if you’ve only got an hour, is not to overthink it. These are the steps for making cinnamon rolls: 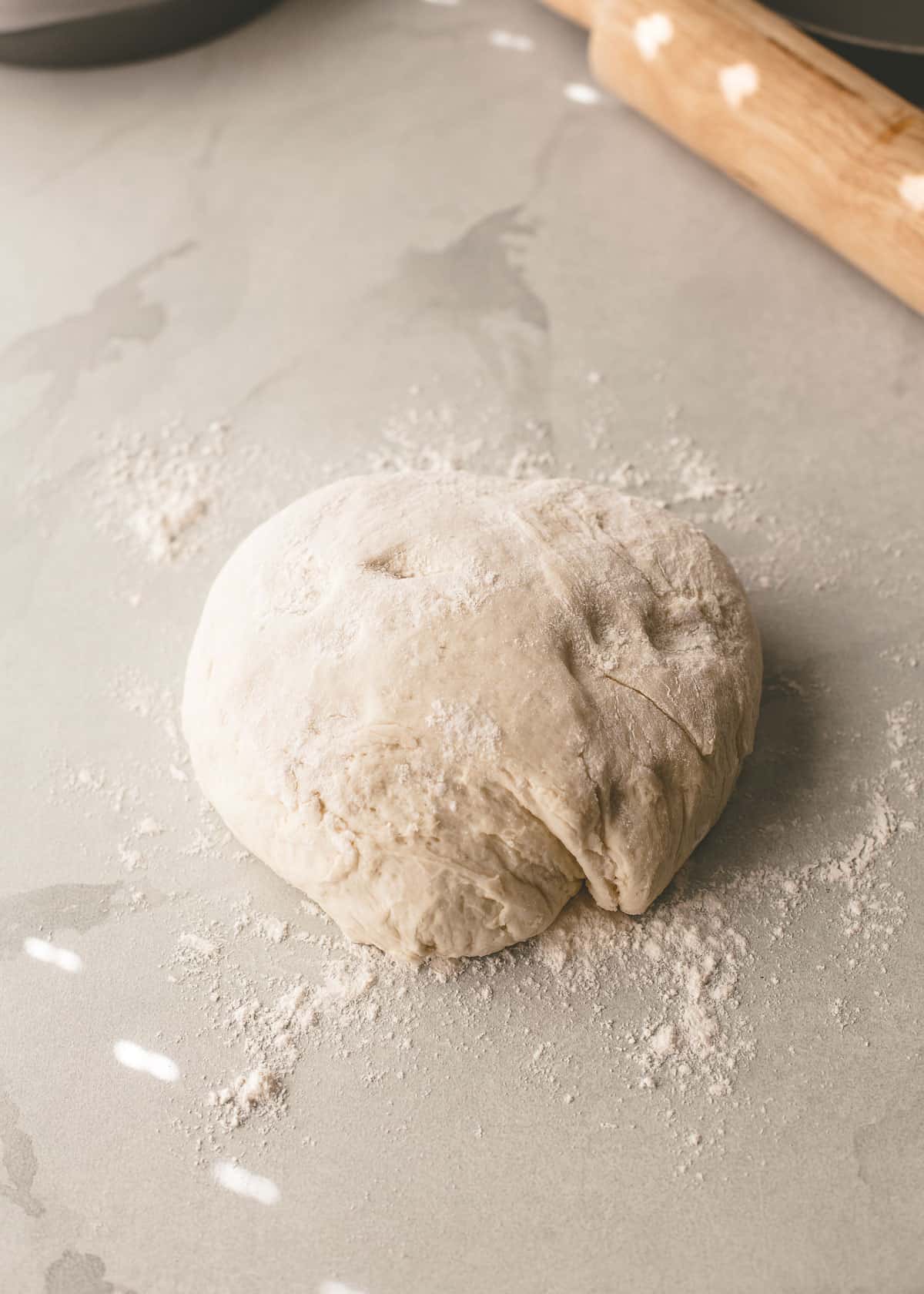 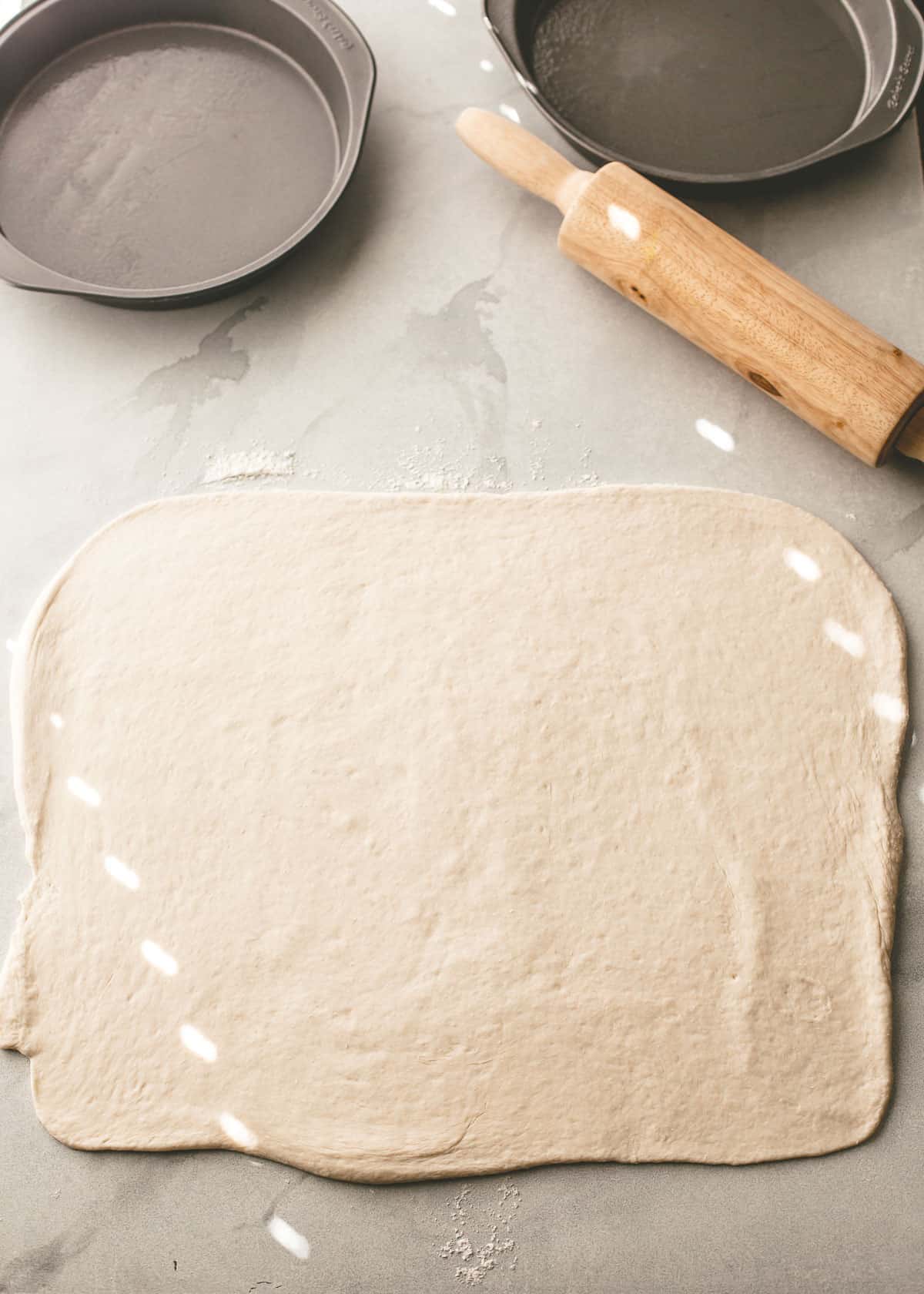 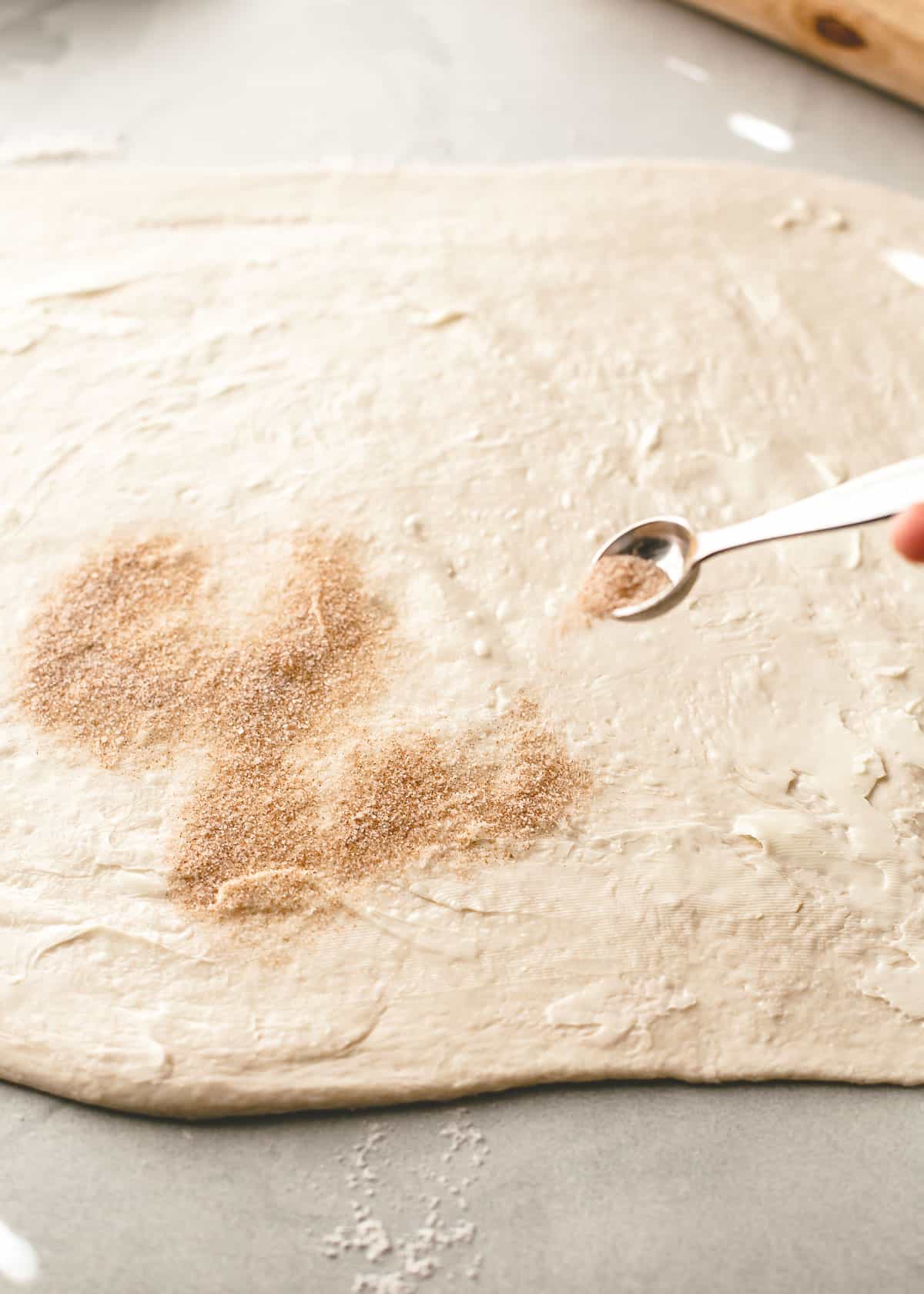 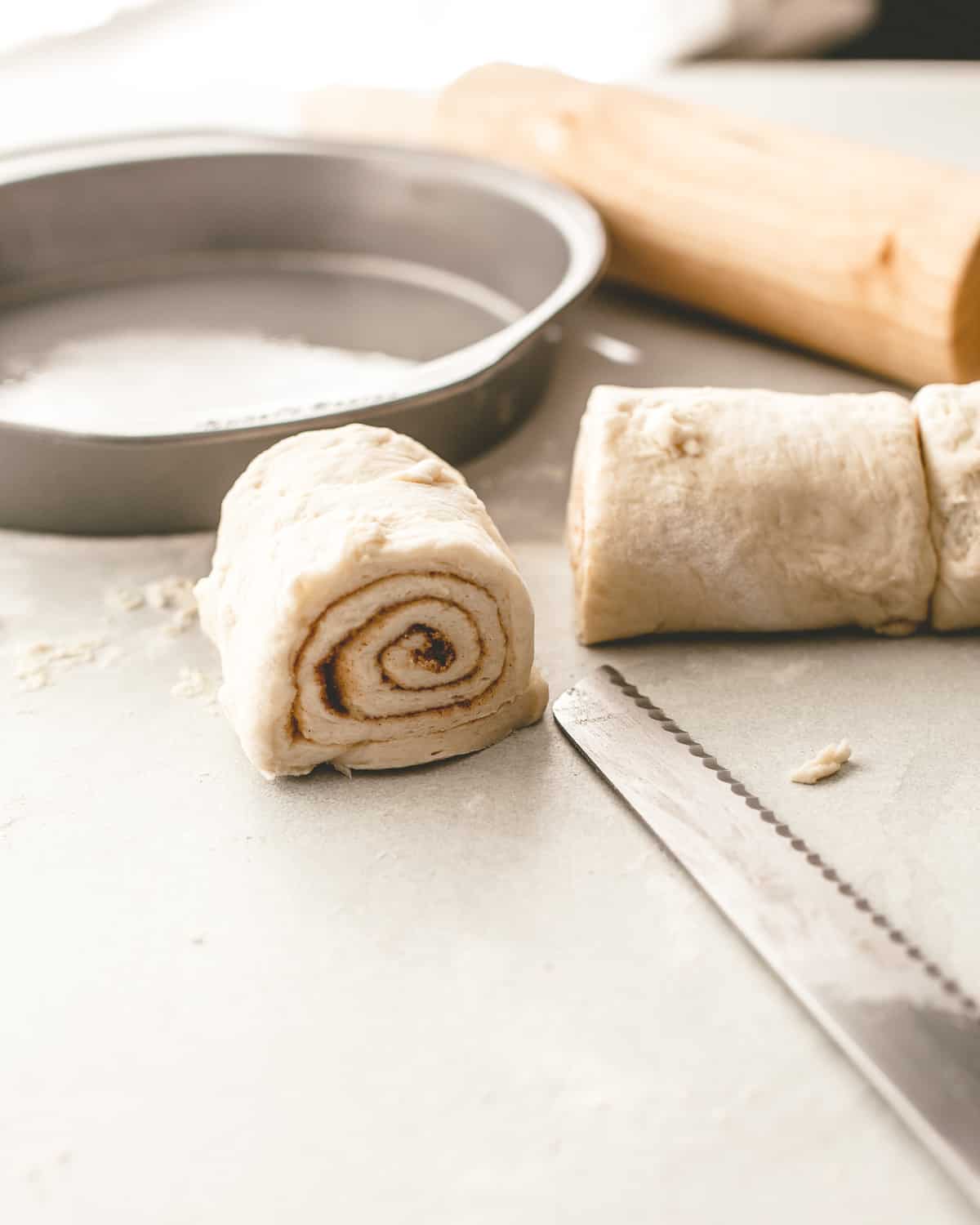 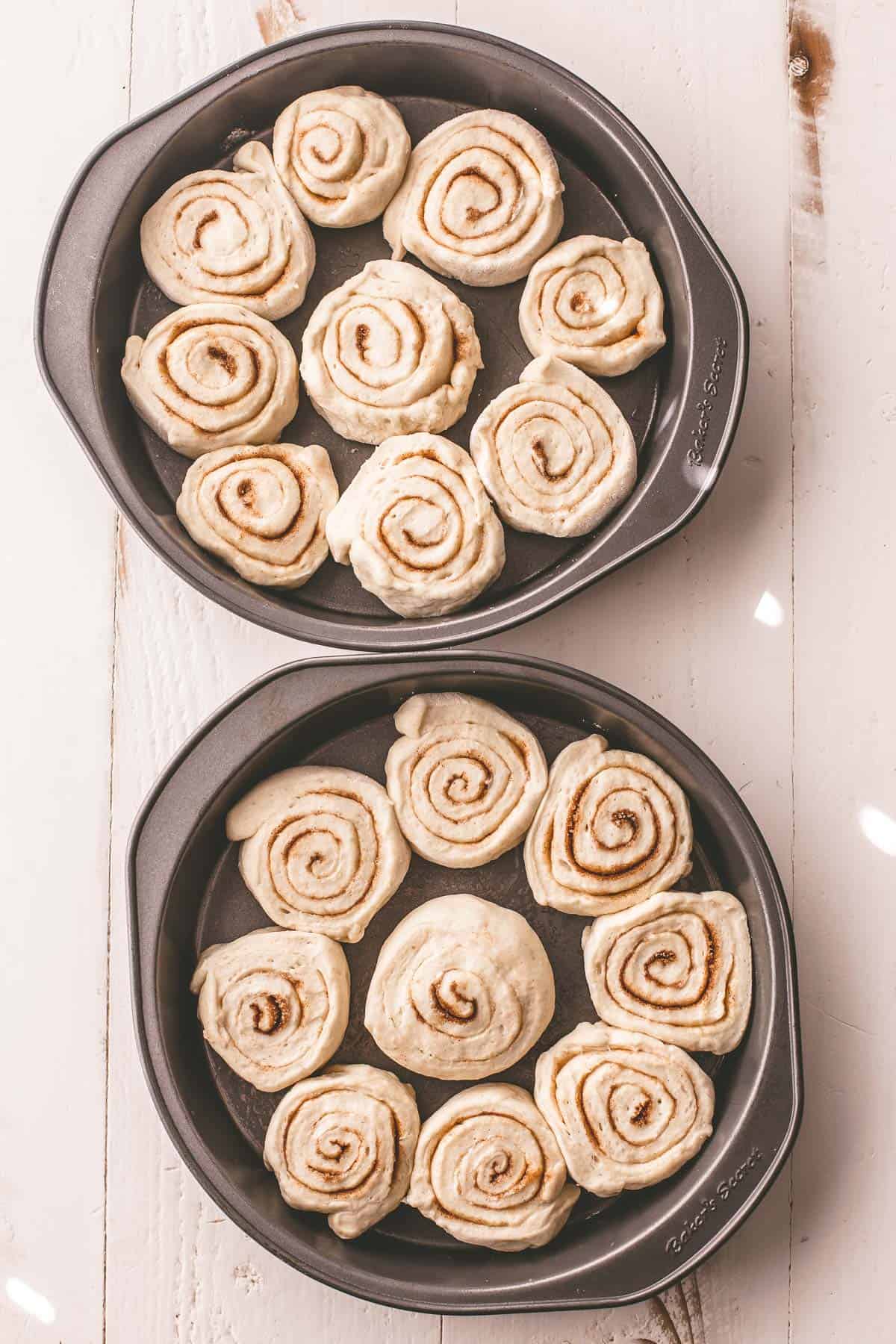 There is one true secret when it comes to great cinnamon rolls. Saigon Cinnamon. Ever wonder what makes those shopping mall cinnamon rolls so fragrant and irresistible? It’s Saigon Cinnamon. The flavor is more intense and exotic than the traditional ground cinnamon that most of us have in our pantry. If you’re going to make homemade cinnamon rolls, this is well worth adding to your spice drawer.

If you don’t have Saigon Cinnamon, increase the amount of regular cinnamon you use so that you get some extra flavor (see recipe for tips). 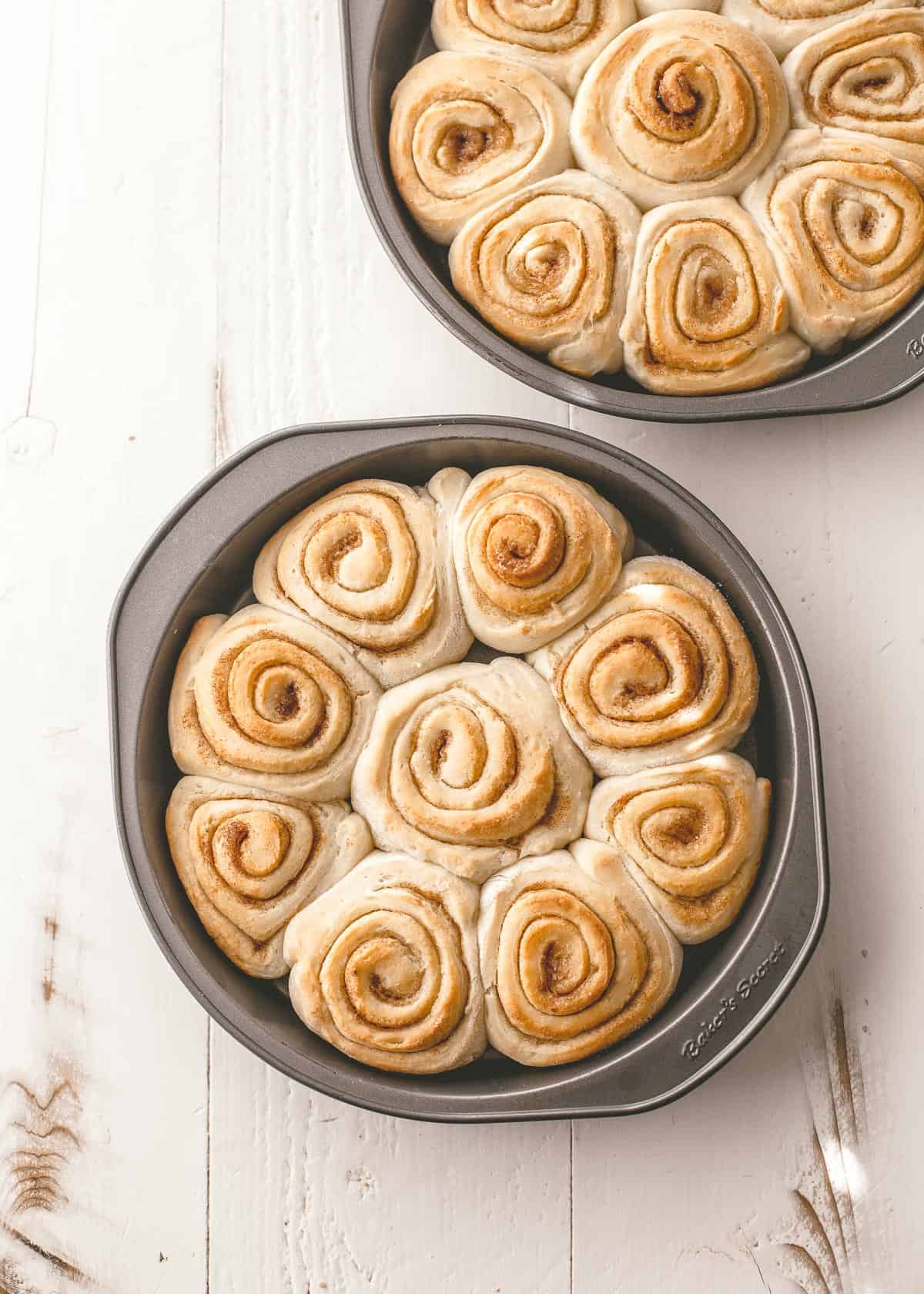 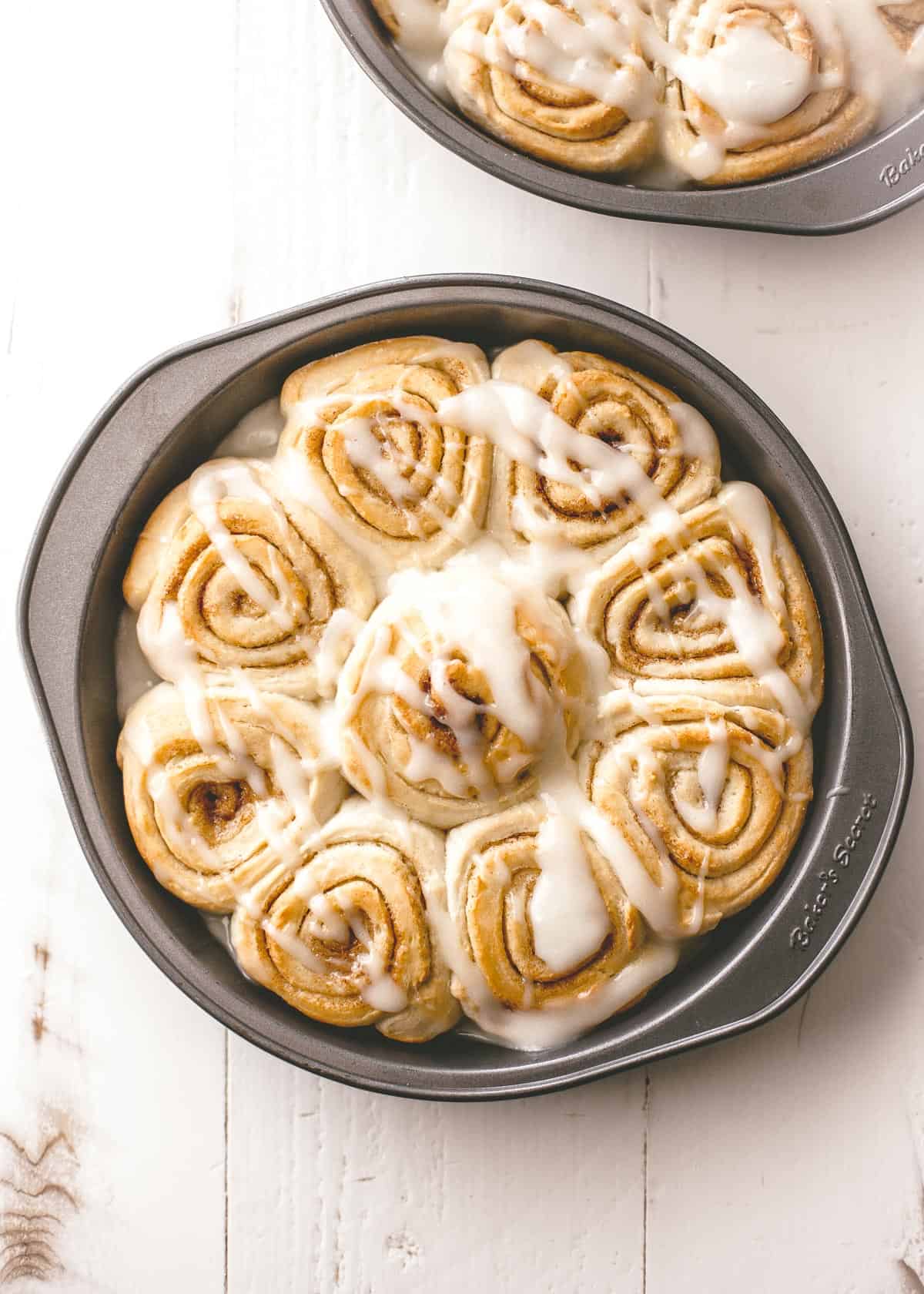 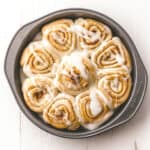 Saigon Cinnamon - This variety of cinnamon a more intense flavor than regular ground cinnamon and makes great cinnamon rolls. But regular ground cinnamon will work fine, but increase to 2 tsp. Knead by Hand - You can easily make this dough by hand if you don't have a stand mixer. Follow the instructions as written, adding the flour in several increments and stirring it with a wooden spoon or spatula. When the flour is mostly mixed in, turn the dough out on a floured surface and knead by hand until smooth and elastic, 6 to 8 minutes. Cream Cheese - To soften the cream cheese, either leave it on the counter for about an hour before starting to bake. You can also microwave it on the defrost setting for about 30 seconds, until soft. Make Ahead - To make the rolls ahead, cover tightly as soon as they have been transferred to the baking dish. Transfer to the refrigerator and refrigerate for up to 24 hours. Allow to come to room temperature (about 45 minutes) before baking as directed. Freeze - To freeze the rolls, cover tightly as soon as they have been transferred to the baking dish. Freeze immediately up to 6 months. To bake, let the rolls come to room temperature and then bake according to recipe instructions. Print and attach the label below so cooking instructions are ready when you are! 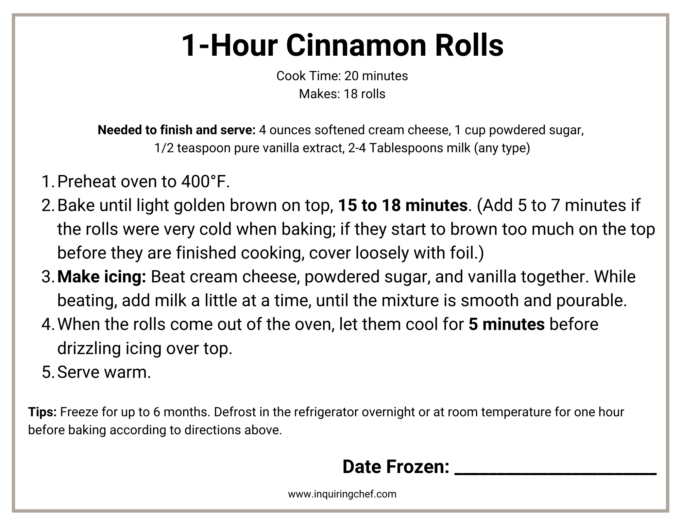