My husband doesn't like soup.  Okay, actually, he wouldn't like me to characterize his soup preference with such broad strokes.  Maybe he doesn't totally dislike it, but he never craves it.  In fact, he has told me that it makes him feel full without being satisfied.  Husbands can be confusing.  Fortunately, I have plenty of other cooking tricks up my sleeve.

(Did you know that I make soup in a wok these days?  It makes me feel like I'm on Iron Chef.) I, however, love soup.  It feels comforting.  A good soup, in my book is simultaneously simple and flavorful.  A good soup gives me the same feeling I get from being curled up on the couch in fuzzy pajamas watching a really good movie. But since the prospect of soup for dinner is exciting only to 50% of our two-person family, there is one time when soup for dinner always seems like a good idea - when Frank is out for the night.  And so, the other night while Frank was out at a post-work happy hour, soup was what was for dinner here at home.

I had had a particular recipe on my mind for a while.  When I stumbled upon this Thai Red Lentil Soup a couple months ago, I immediately bookmarked it.  Lentil soup has never been my favorite, but healthy lentils with Thai-style pizzaz - yes, please. And although I was husband-less for the evening, I was not alone.  This little guy made me jump out of my flip-flops when I came across him next to the outlet while plugging in my laptop.  This is the second one we've found in the apartment in the past two weeks.

For six months we've been free of creatures in the apartment, but they've now found their way in and are looking to join us for dinner. 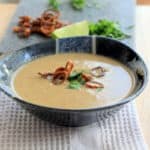 « Koh Samui: Thai Beaches - What Took Us So Long?
The Most Anticipated Film of the Year (well, maybe just for expats in Bangkok) »