Remember a while back when I mentioned the BBC series on traveling across the Himalayas and the lovely cucumber salad it inspired?  Well let’s call this dinner part 2 in the Himalayan-inspired dinner series.   Last week we watched Michael Palin travel to Amristar and the golden temple where he took part in eating the free lunch of dal and naan that is made by volunteers and served to 10,000 visitors a day.  (Nearly 100,000 people visit the temple every week, according to Wikipedia, source of all random facts.)  I watched in awe.  Sometimes it’s hard just to feed two people in this house.

Unfortunately, the dal served on the show in Palin’s free lunch was a thin, yellow liquid…not so appetizing.  But the naan.  Ohhh, the naan.  Prepared on a grill over a hot, coal-fueled fire and flipped precisely at the moment that it bubbles and blackens ever-so-slightly in places.  Now that got me.

I am happy to report that this recipe produced a soft, moist naan with a tin bit of crunch where it cooked on the outside.  Although many naan recipes I found were somewhat complex, requiring the addition of ghee (clarified butter) or other ingredients that I don’t typically have on hand, the recipe below is not only more simple than most others, but gets a moist, tangy flavor from yogurt and a bit of goat cheese.

And here is the greatest thing.  After making this naan several times, it turns out to be one of the most forgiving breads I have ever made.  A couple times I made this at the last minute, not having the time to let it rise for 2 hours, but it cooks beautifully even after resting on the counter for 30 minutes while I pull everything else together.  But it really won me over when, one night after making the dough, I decided I didn’t have the energy to cook it (and made pasta for dinner instead).  I threw that beautiful ball of naan dough in the fridge coated in a bit of olive oil, and when I cooked it up the next day, it came out absolutely perfect. 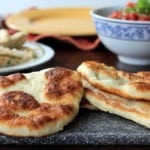 Making your own, hot, fresh cheese naan is easier than you might think.
Servings: 2
Author: Jess Smith via Inquiring Chef