Dukkah is an Egyptian spice made with nuts (most often hazelnuts, but pistachios, cashews, or pine nuts work) and spices, but its flavor is really defined by the smokiness imparted from toasting the ingredients.
A favorite conversation among expats living in Bangkok goes something like this.
Expat 1: You'll never believe what I found at Villa today.
Expat 2: What's that?
Expat 1: Molasses.
Expat 2: No way!  Do they have more?
Expat 1: A couple jars, but you better hurry.  You know how fast those will go.
Expat 2: Speaking of, you know what I saw at Tops on Sukhumvit?
Expat 1: What?
Expat 2: Pinenuts.
Expat 1: Really?  I've got to get over there...
Things can carry on endlessly in this way.  Us Westerners love to talk about the offerings at local fancy grocery stores and acquire a competitive spirit when it comes to discovering unusual items that remind us of home (or of other favorite cuisines).   It's a charming line of conversation because it gives us common ground - a reminder that we're not in this alone.
It's also a substitute for the weather chitchat that goes on in other parts of the world.  In Bangkok you can only get so far with weather chitchat.
What's the weather like today?  Hot.
It's always hot.
Last week, in the midst of a hectic work week and general run-of-the-mill business, Frank and I found time to meet up for a date night near a grocery store that notoriously carries all types of international food.   They have marshmallows and organic quinoa and Betty Crocker cake mixes.  I did a little shopping therapy and walked out with a jar of tahini. That tahini inspired a flurry of hummus-making this weekend.  Lately I've been adding a few of my marinated roasted red peppers for the subtlest hint of sweetness and a creamy texture to my hummus, but it has always needed tahini.  Now that I have the coveted tahini, I've finally got my hummus nailed down.

After the tahini discovery, I was on the prowl for anything that might be suitable to serve with a heaping dollop of hummus.  So it should be no surprise that I settled on Sukkah. Dukkah is an Egyptian spice that I have long been curious about, but have somehow never set out to make.  To call it a "spice" is a bit misleading, as it sounds more limiting than dukkah actually is.  The base of the dukkah is nuts (most often hazelnuts, but pistachios, cashews, or pinenuts also work) and spices, but its flavor is really defined by the smokiness imparted from toasting each element. For the moment, we've primarily consumed this dukkah in its purest form - served with bread and olive oil (and hummus).

You pull off a piece of bread, dip it in olive oil, then in dukkah and eat it.  Divine.

We did use a little for dipping pizza crust over the weekend. But, with this dukkah tucked away in my organized little spice drawer, the possibilities are endless.  Sprinkle it over roast vegetables, toss it with couscous or rice, or sprinkle it over ground chicken for a variation on this addictive Turkish pizza. 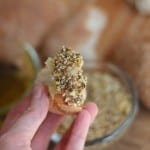