Boiled first and then baked at high heat, Smashed Potatoes with Sriracha Sauce are crispy on the outside, creamy on the inside, and suitable for any and all the delicious toppings.

One of the unexpected realities of having a food blog is that we're always on the hunt for something new. Except for a weekly pizza night and a few staples, I rarely make anything more than the number of times it takes to deem it unworthy or perfect it to share.

I've read about these smart, organized parents who plan their dinners by theme - Mexican on Mondays, Italian on Tuesdays. I always think that it's such a great idea until I realize that it would leave me no room to cook the 83457 recipes I've pinned.  I mean, what theme would Crispy Fried Chickpeas with Lime fall under?

Having a food blog also means that I become a ball of indecisiveness with potluck dinners. Too. Many. Choices.

But while I'll never stop hoarding new recipes (at least as long as I have this little blog), I've been wanting to bring a few things from the past back into the dinner-time rotation. After all, in a matter of months I'll be responsible for feeding real dinners to two little people.  I'd better have some tricks up my sleeve or we're going with Mexican Mondays all the way.

Hopefully you've seen or tried these "smashed potatoes"? This time around I roasted the potatoes with garlicky olive oil and topped them with green onions and spicy sriracha "sauce" (really just sriracha and mayo). The combination is great - like dipping salty fries into spicy sauce.

Note to self: make these again. 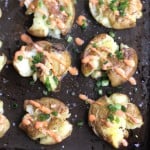 Boiled first and then baked at high heat, Smashed Potatoes with Sriracha Sauce are crispy on the outside, creamy on the inside, and suitable for any and all the delicious toppings.
Prep Time30 mins
Cook Time20 mins
Total Time50 mins
Course: Side Dish
Keyword: easy side dish, easy vegetable side, potatoes, vegetarian
Servings: 4
Calories: 821kcal
Author: Jess Smith via Inquiring Chef
Cost: $4.00

Molly and Clara skipped the potatoes and finger-painted with avocado instead.