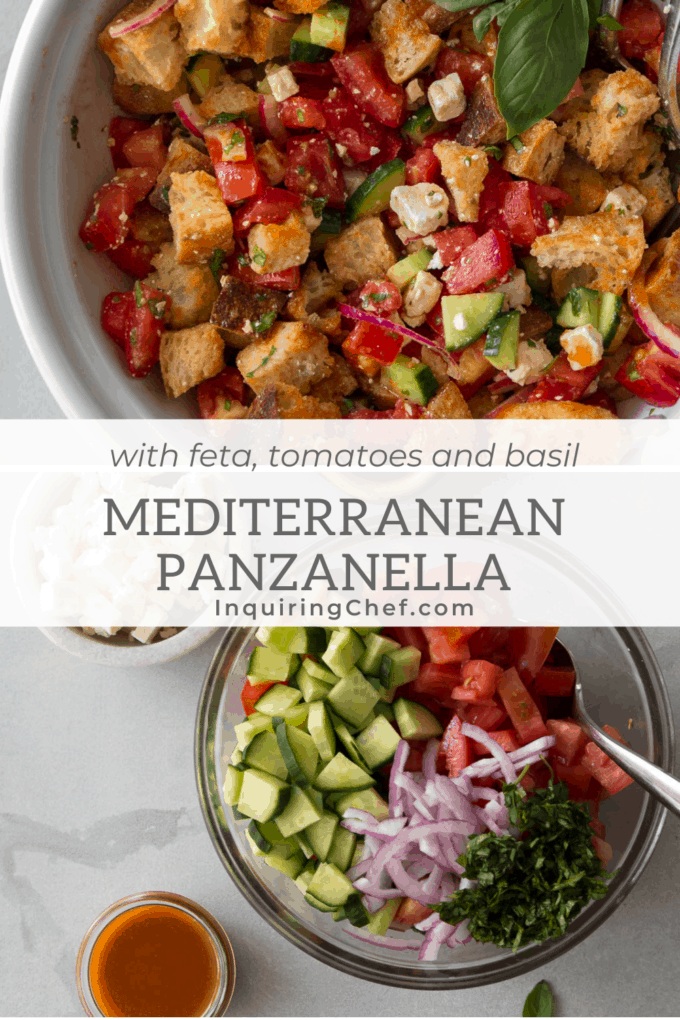 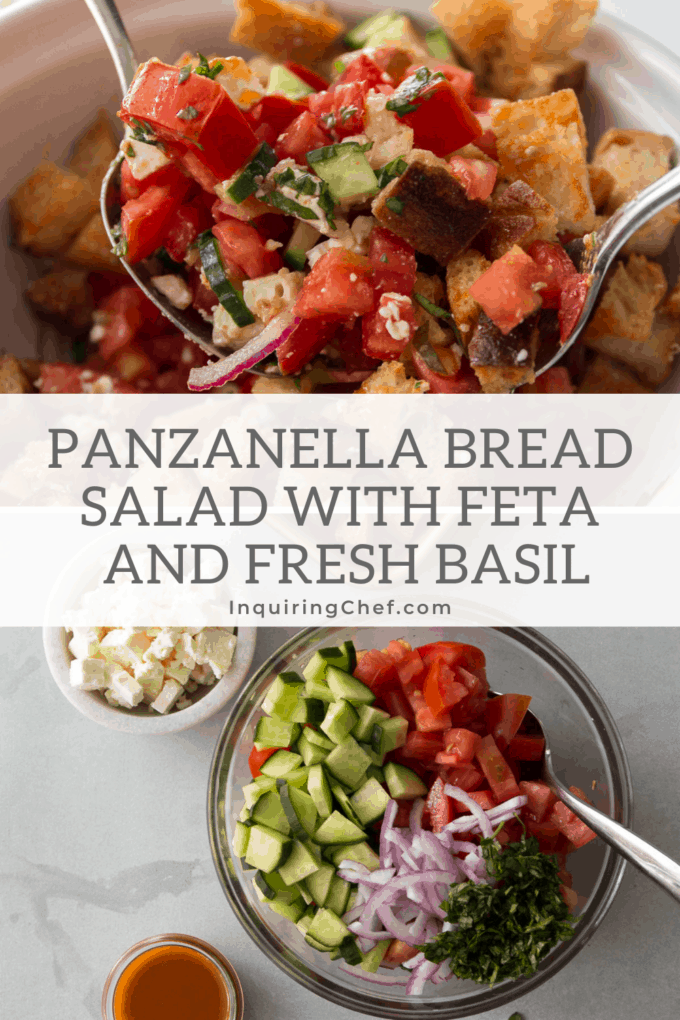 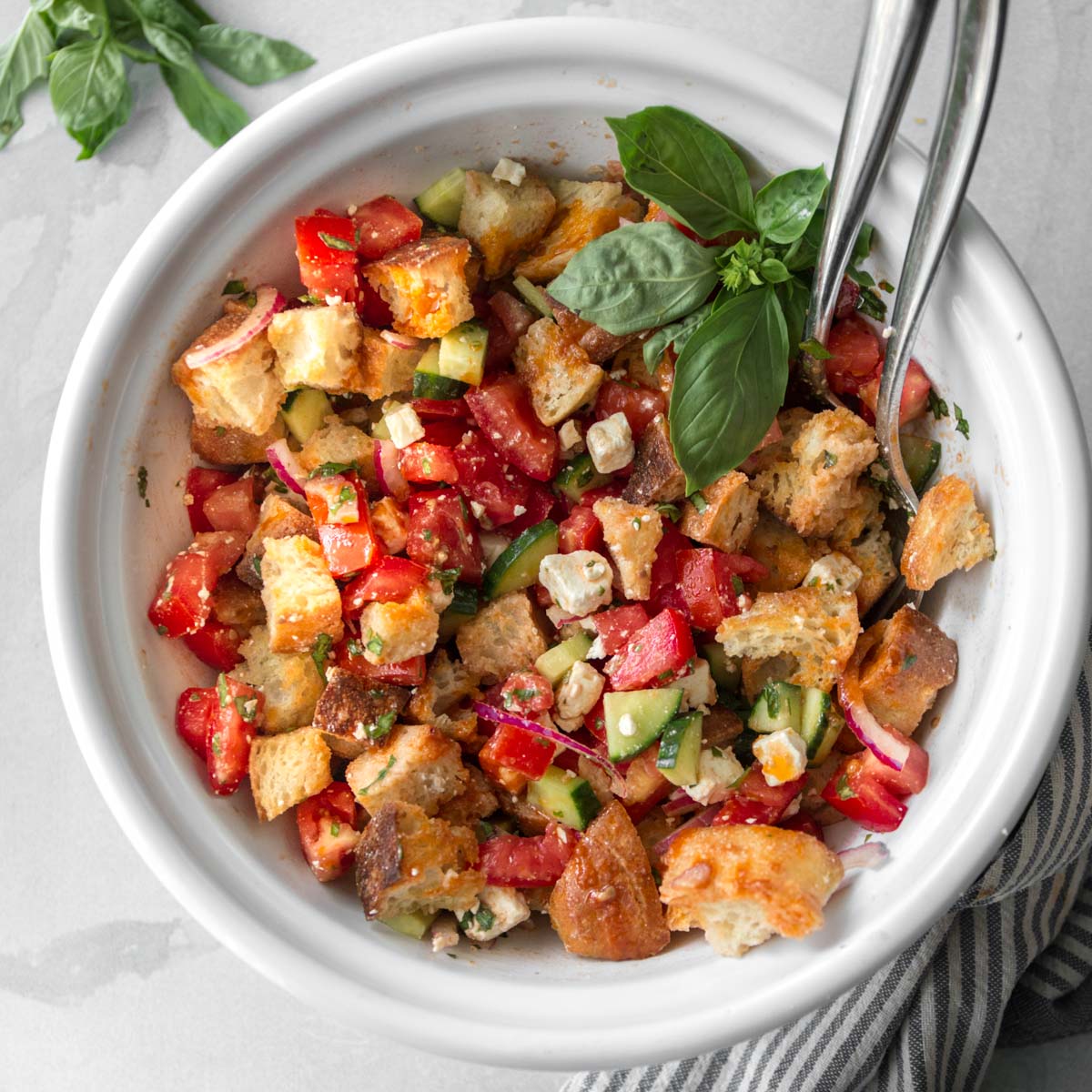 Fresh and flavorful, few dishes celebrate the flavors of summer like the bread salad known as Panzanella. This version includes a simple dressing made with sun-dried tomatoes for extra tomato flavor and cucumbers, feta, and basil for added flavor and texture.

Summer is here and our small garden is finally starting to churn out cucumbers and herbs and the occasional summer squash. No tomatoes yet, but I’m finding great ones at the farmers market. And great summer produce means it’s time for a great summer salad - Panzanella. If you want all those delicious summer flavors in a fresh, hearty salad, this one's for you. 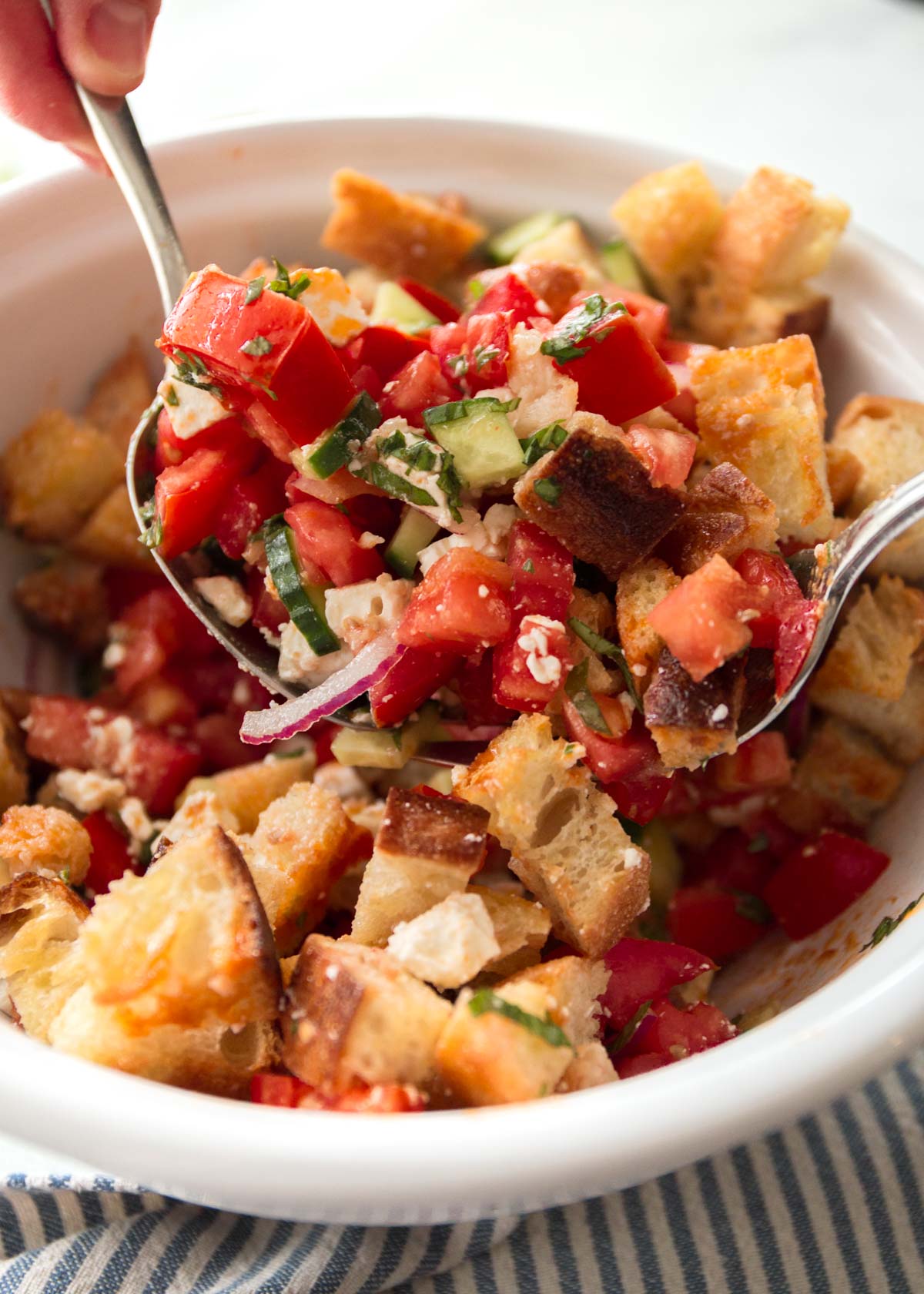 Panzanella is an Italian salad made from sturdy bread cubes and fresh tomatoes. The bread soaks up the juices from the tomatoes resulting in a hearty salad that is full of summer flavor.

While the basic salad is just bread and tomatoes, it is a perfect blank slate for adding your other favorite summer ingredients. 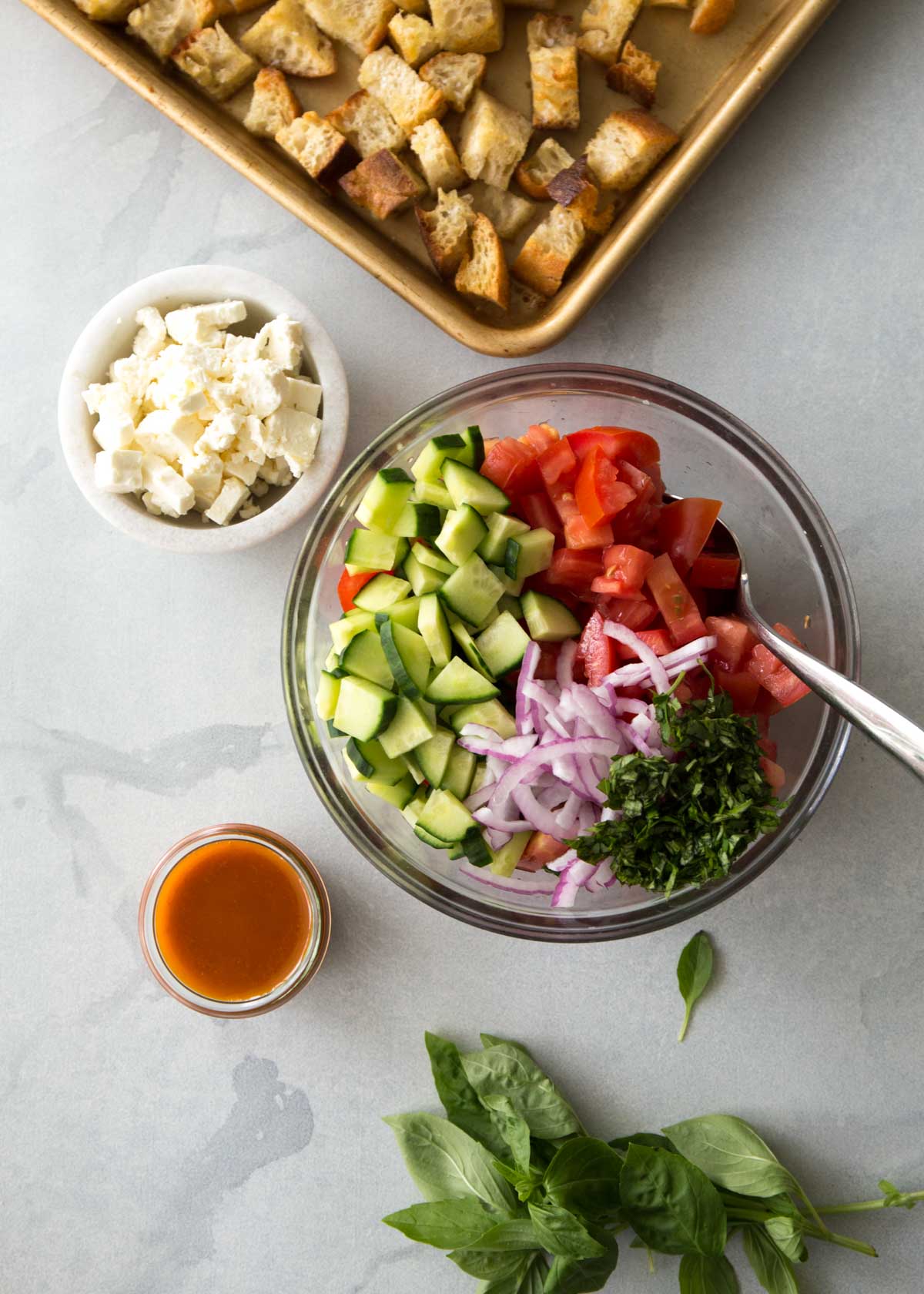 When to Serve Panzanella

Panzanella is best served in late summer when tomatoes are in season and the most flavorful. It’s great as a lunch on its own - add in some white beans or top it with a poached egg. Or serve it as a dinner side dish with grilled meat or fish.

Panzanella is traditionally made with day-old (stale) bread, but this recipe calls for toasting bread cubes to give them a similar sturdy texture that soaks up the flavor of the vinaigrette. The toasting step also adds flavor to the salad.

Bread salad like panzanella does not need a dressing. Fresh in-season tomatoes will release enough juice to soak and flavor the bread cubes. However, this version of the salad includes a rich, flavorful dressing made with sun-dried tomato and fresh basil to highlight the summer flavors of the salad. 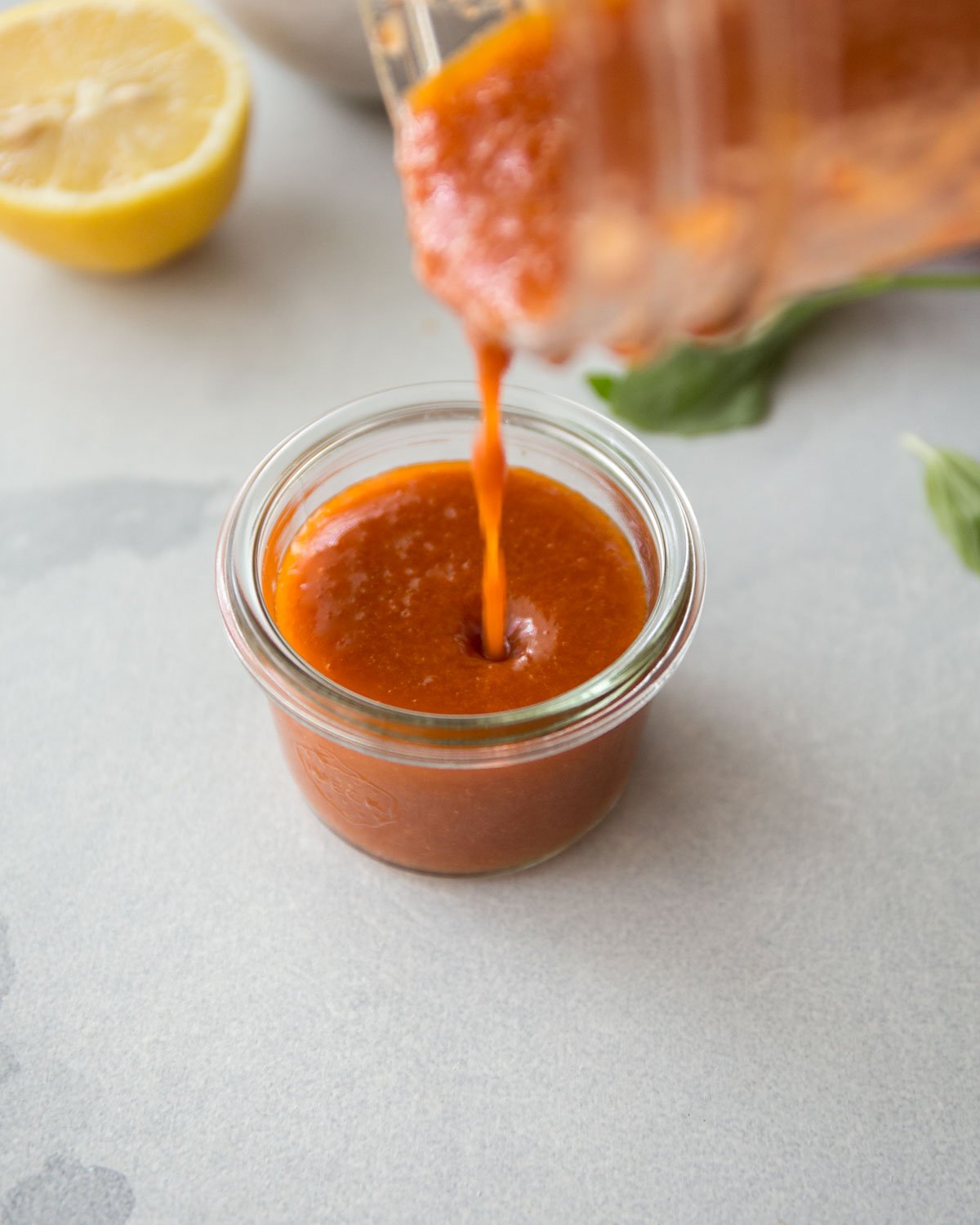 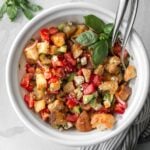