When I lived in Romania after college, I spent every day for a year in a house full of children.  There were always three adults as well - two to look after the kids; one to cook.

Cooking was a full-time job, and it was rotated among all the ladies in the house.  Except for me.  I was considered only capable of eating what was cooked in that kitchen (and it suited me just fine).  Though I spent my days singing songs, playing games, running in the park, and carrying any number of kids on my back, when they were napping and the house was quiet, I camped out in the kitchen.

From the kitchen table, I watched four seasons of recipes pass through sun-filled space.  In the summer we feasted on deep red tomatoes, and red peppers still warm from the garden.  In the fall, there was canning to be done - everything imaginable became pickles or jams or savory spreads.  The winter was all about soup from jars that had been put away and potatoes cooked, or fried, or baked.  Though most every recipe prepared in that kitchen corresponded with a season, one recipe made a year-round showing.  Clătite.

Clătite are crepes - cooked fast in a hot pan and filled with something sweet or savory.  In Romania, we always ate them sweet.  They got a sprinkle of crunchy sugar or a sweep of house-made jam.  The women in charge of cooking for all of those kids cranked out clătite as if they were serving an army (which, of course, they were).  And by the time those kids came down from nap, rubbing the sleep from their eyes, there would be a pyramid of clătite waiting. I used to practice making these in the Romanian winter when my radiators were insufficient and a working kitchen was the only warm spot.  One week in particular, a snow drift positioned itself outside the door to our apartment building and I and my neighbors were trapped inside until someone made it by to dig us out.  I made clătite.

The recipe has been hiding in the back of my brain for years, and it took a couple of attempts to get back into the swing of it.  Fortunately, the one thing I learned from watching hundreds (probably thousands) of clătite cooked, is that there are always a few that don't look quite perfect.  The first one, in particular, is never pretty (that's it on the right down below).

The less-than-perfect clătite are for snacking while you make the rest. Oh, and should you be so inclined, let me put in a plug for the sheer goodness of clătite topped with nutella and bananas. 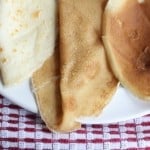 This recipe is quite forgiving, but it may require a few adjustments to get the consistency right. You want the batter be a flowing liquid and to spread quickly out to the edges of the pan once poured (if it is too thick, it will pool in one spot like a pancake). If the batter doesn’t spread quickly to the edges of the pan, simply add a bit more water. In my town in Romania, everyone swore by using sparkling water in their clătite, but it works perfectly fine with water straight from the tap.