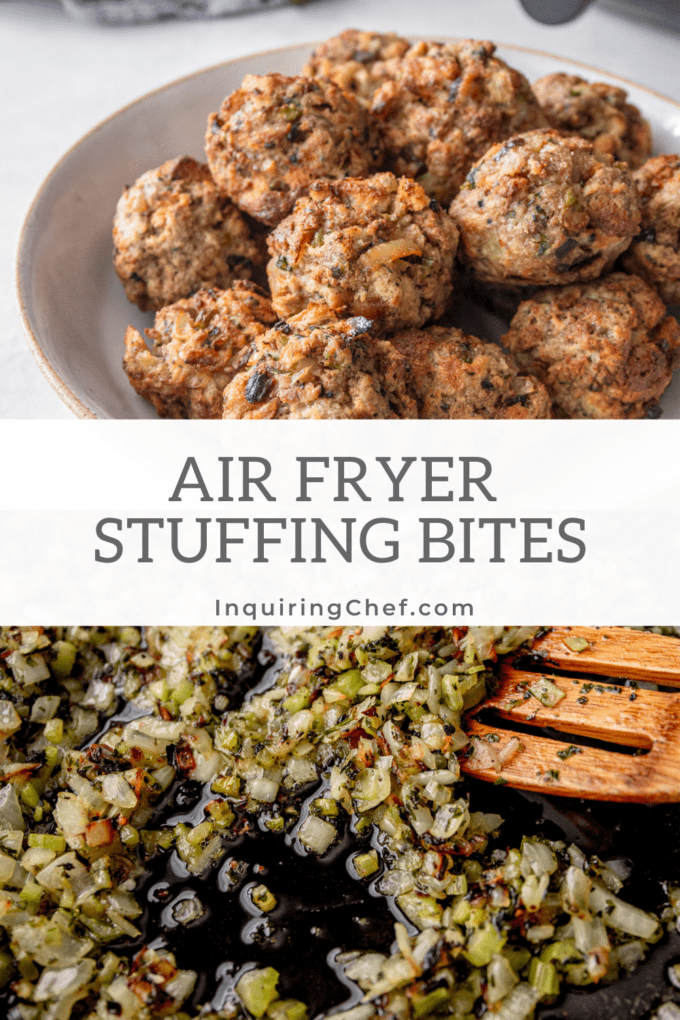 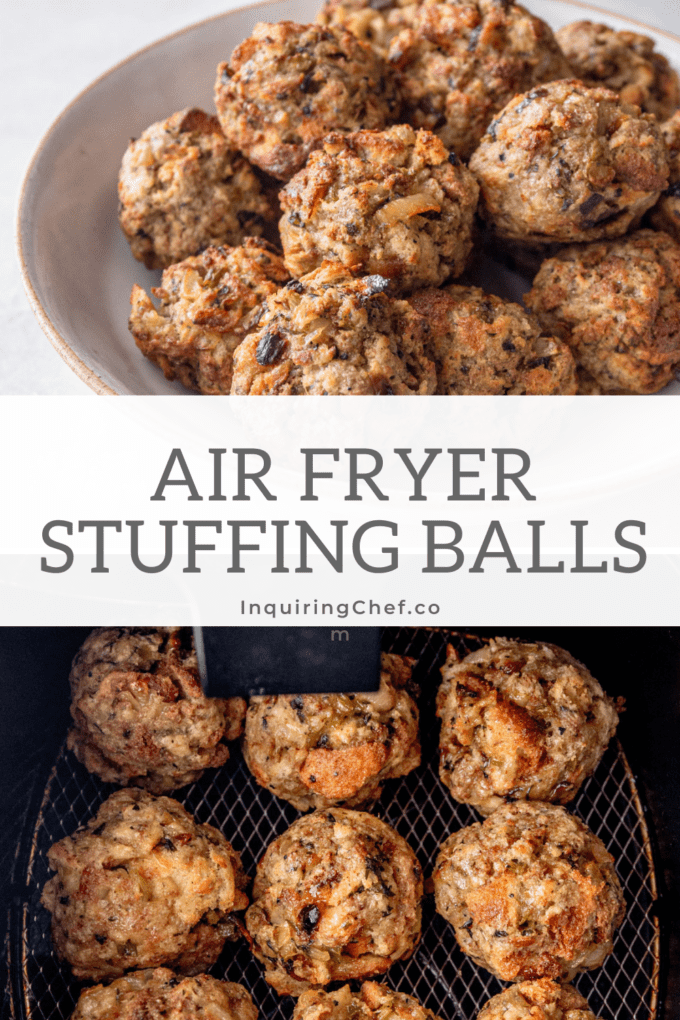 Perfect for Thanksgiving, Christmas, or for serving any night with roast meats, vegetables, and mashed potatoes, Air Fryer Stuffing Balls are the most fun way to serve this delicious side dish. This recipe includes instructions for freezing and then cooking the stuffing balls right from the freezer.

Stuffing is a staple at a holiday dinner. And as much as I love classic stuffing baked in a casserole, this great side dish gets a lot more fun when you roll it into balls and bake or air fry it until golden and crisp. And they’re every bit as good the next day. If you’re looking to bake these in the oven, check out my original Stuffing Ball recipe, but if you want to try making them in the air fryer, read on. They have a great texture with golden, crisp outsides and tender, pillowy insides.

Here’s the scoop on this great stuffing recipe!

No matter what you call them, these are a delicious alternative to classic stuffing baked in a casserole dish. Roll the stuffing into balls and bake or air fry them until they are golden and crisp on the outside. You can serve them as you would regular stuffing, for breaking apart and scooping up with mashed potatoes, turkey, and cranberry sauce. OR, try enjoying them like you would dinner rolls. Break them apart and spread them with softened butter.

I shared a clip of those tender centers in this short video on Instagram.

How to Make Stuffing Balls

What size to make them

I use about ¼ cup to make each of the stuffing balls. A measuring cup works, but if you have a spring-loaded ice cream scoop or a large cookie scoop, those make the process of making these really easy. I use a heaping 3 Tablespoon scoop (I have this set). You can make these any size you’d like, but be sure to adjust the cooking time accordingly and / or just keep an eye on them and pull them out when they’re nice and golden brown.

Can I use Stove Top Stuffing?

Can these be made ahead?

Yes. Roll the stuffing into balls up to 3 days ahead. Cover tightly and refrigerate until you’re ready to bake them.


I did not test these with other stuffing additions, but I’m pretty certain they will work. Be sure to cook the additional ingredients ahead of time before adding them to the stuffing mixture.

Just be sure to use vegetable stock instead of chicken stock to easily make them vegetarian.

Can I reduce the sodium?


Yes. Condensed Cream of Mushroom Soup contains a lot of salt. Look for unsalted or low-sodium version of this product so that you can control the amount of salt you add.

How do I store leftovers?


Store leftovers in an airtight container in the refrigerator for up to 5 days. Reheat leftover stuffing balls in the microwave or back in the air fryer! 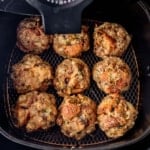 Make Ahead: The stuffing balls can be assembled and refrigerated for up to 3 days before cooking. Cover them tightly to prevent them from drying out.  Pepperidge Farm Herb Seasoned Classic Stuffing - Be sure to grab the “classic stuffing” which comes in bite-sized pieces, not cubes. It’s sold in the blue bag.  Stove Top Stuffing: My recipe testers and I tried this recipe using Stove Top Stuffing which can be easier to find outside of the holidays. We enjoyed them this way, but because both Stove Top Stuffing Mix and Cream of Mushroom Soup are both quite salty, the stuffing balls came out noticeably salty this way. For this reason, I strongly recommend getting unsalted or low-sodium Concentrated Cream of Mushroom Soup. Also be sure to use unsalted butter to keep the salt content down. Below is the recipe using Stove Top Stuffing Mix. It makes about 20 stuffing balls.   Freezer Instructions: To freeze the stuffing balls, assemble the balls as directed (but do not cook them) and line them up on a parchment-lined baking sheet. Freeze until solid, at least 4 hours. Transfer to a well-sealed freezer bag. Cook within 2 months. To cook the stuffing balls from frozen, spray them lightly with olive oil cooking spray. Bake them in a preheated air fryer at 300°F for 16 to 22 minutes or until heated all the way through. (A thermometer inserted in the center should register 160°F.) Freeze for up to 2 months. Print and attach the label below so that cooking instructions are right at your fingertips! 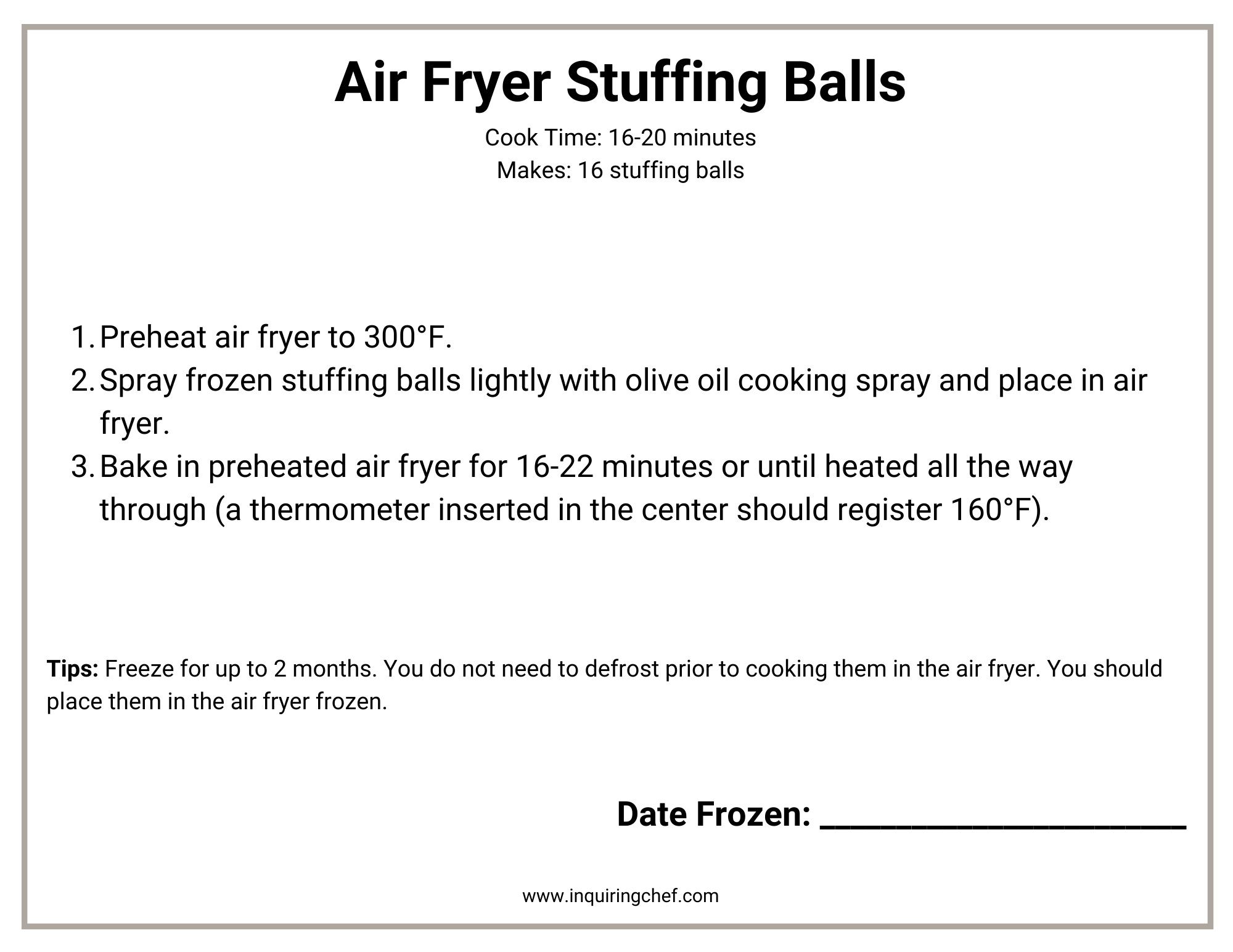