Yesterday it rained in Bangkok.  Not a gentle rain.  A drenching, gray, blustery rain that rolled in on the tail of the gloomiest cloud I have ever seen. I forgot my umbrella at my office the day before, and downright sprinted in to work to beat the downpour.

As luck would have it, yesterday was also the day that both Frank and I had a long-planned-for work event that was to be held...you guessed it...outside.  Typical.

Despite the rain earlier in the day, the event went off without a hitch, with 340 guests hopscotching between paths protected by tents and a covered patio.  The dicey weather was an afterthought.

The heavy rains that fall on Bangkok this time of year are a certain inconvenience, but now in my second year here, I find myself welcoming the change.  Everything turns green, ponds and canals fill, and for a few brief moments after the rain subsides, the weather feels almost cool.  Almost.

Last year, right around this time, I got on a kick where I wanted everything I made to involve some variation on the flavors in this Pan Roasted Salmon and Bread Salad (still one of my favorite recipes).  My obsession with the tart lemon kick of that salad coincided with my "discovery" of the gazillion uses for chickpeas, and this Lemon Chickpea Salad with Roasted Red Peppers became my salad of the summer.

This year, I'm back to craving those same flavors.  Maybe it's the contrast they bring to the gloomy weather while still being so downright summery. 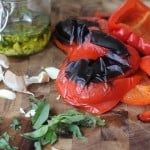 For the Roasted, Marinated Red Peppers

I love this on its own, but it is fantastic with the addition of a bit of cheese - add goat cheese, gorgonzola, or parmesan just before serving.