Make this easy white bean bruschetta with my simple method that adds tons of flavor to canned white beans. You'll love the creamy white bean puree piled on top of crusty bread as snack or at party.

I'm coming up for air from the long overdue process of updating old recipes on this site with the formatting that you can see down below.

I'm not gonna lie, it's mind-numbingly tedious, but it brings out my Type A-ness.  Once I started, it was hard to stop.

I've also been cleaning up some of my old pictures (as far back as those I took in November 2010) with sizing that makes them load more quickly on the screen of a computer.  (What I wouldn't give to have known I should do that from the very beginning.)

The good news is that the updates make it easy to print recipes and, if you use it, to save them to a shopping list and recipe box in Ziplist.  I say all this only because, if you are reading this, and you have a food blog, don't make my mistake.  Start using a recipe formatting program sooner than later.  You'll be glad you did.

There is one really great thing that has come out of working through every recipe I've ever made for this blog.  It is reminding me of some favorites that got lost in the shuffle.  A few like Panko Shrimp Skewers with Orange Couscous, Roasted Salmon and Bread Salad, and Spinach with White Beans and Pine Nuts should not have gone unmade for so long.  In fact, I just decided we'll be making that last one for dinner tonight.

When I make a big pot of white beans, I give them a bit of extra flavor by throwing a half an onion and a half a carrot (sliced) into the mix.  I learned this trick from Tom Colicchio's Marinated Chickpea recipe, and I really do think it's worthwhile for all the extra flavor it gives the beans.

You can, of course, always use canned white beans for that Spinach and White bean dinner, but then you wouldn't have leftovers.  And leftover white beans really come in handy for making this snack-worthy white bean bruschetta.

My friend Katie who blogs at the The Muffin Myth also made a white bean purée recently and called it a "mellower cousin to hummus", and she's spot on.  A white bean purée has a bit of sweetness that hummus lacks, and it becomes even more creamy than its chickpea-based relative.  But you can use it in all the same ways.  Dunk carrots into it, use it in wraps or on sandwiches, or spread it over toasty, olive oil drizzled bread for this white bean bruschetta.

You can see which route I went. 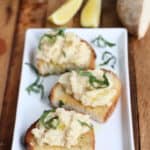