The crunch of the flour tortillas under a mix of toppings makes these Crispy Vegetarian Tostadas one of our all-time favorite dinners. This is one of those recipes that is barely a recipe. More of a technique, with endless adaptations. Adapt away!

On the first Friday of Lent I catch myself smiling at a favorite memory from the first year that Frank and I were dating. We had been dating for at least six months and often cooking together during the evenings when Lent arrived and (what I then thought of as) my will-eat-anything boyfriend developed a weekly routine of pondering over what he would eat on Friday.

I was surprised by his concern, but also charmed. Lent is a good time to think about making sacrifices and being appreciative, and Frank's awareness of doing without meat means that he has always thought sincerely and deeply about the meaning of this time of year.

In that early stage of dating, however, I remember that it was a dimension of this man that I found intriguing. I have never been terribly attached to eating meat (although I most certainly do eat meat these days). This is true for the way that Frank and I cook at home, but was also true of the way that I cooked back when we first started dating.  Even though Frank frequently goes days at a time without eating a bit of meat, when Lent rolls around, he seems to want it...particularly on Fridays.

And though I sometimes half-heartedly try to remind him that so many of our favorite meals contain no meat at all, a part of me loves that these Fridays during Lent have such significance in our home.

If you are doing without meat on Fridays this Lenten season, this slightly indulgent, divinely crisp, make-your-own style of tostada dinner is just what you need.

Hopefully you'll still feel appreciative of all that you have. But I promise that while eating this dinner, you won't feel that you've sacrificed a thing. 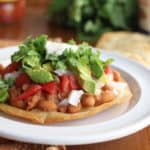 The crunch of the flour tortillas under a mix of toppings make this one of our all-time favorite dinners. This is one of those recipes that is barely a recipe. More of a technique, with endless adaptations.
Prep Time30 mins
Cook Time15 mins
Total Time45 mins
Course: Main Dish, Vegetarian
Cuisine: Tex Mex
Keyword: easy dinner, healthyish, vegetarian
Servings: 4
Calories: 230kcal
Author: Jess Smith via Inquiring Chef
Cost: $6.00

« ﻿Crispy Cauliflower with Capers and Breadcrumbs
To Spite the Heat »