Over the weekend I managed to take a divinely simple summer dish, roasted tomato bruschetta,  that usually does not require a recipe and turn it into a day-long DIY project. I think after a week of minimal kitchen activity, the prospect of an entirely unplanned Sunday afternoon was enough to send me into a cooking frenzy.

This recipe from Food and Wine was a staple of our DC summer life, because it could be made entirely of ingredients I would pick up at the Dupont Circle Farmer’s Market – fresh baguette, ricotta from Blue Ridge Dairy, basil, and cherry tomatoes.  A few years ago we quadrupled the recipe, invited over a bunch of friends, and sat around the table on a steamy July night, laughing and eating this bruschetta with copious amounts of white wine until late into the night. It probably would have never occurred to me to make bruschetta with ricotta (which is not widely available in Bangkok) if not for this post on ricotta from the ever-inspiring Smitten Kitchen.  And although several other kitchen endeavors on Sunday were massive failures (don’t even get me started on my first attempt at macarons), the ricotta came out creamy and delicious.  Combined with this easy baguette recipe that came out a nice crust, the bruschetta were not the quick, thrown-together dinner they would have been on a Sunday back home, but were every bit as good as I remembered them to be.

The only things missing were the table full of friends and bottles of white wine. 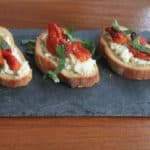 Adapted from Honey-Tomato Bruschetta from Food and Wine.

Love bruschetta? Check out my recipe for Roasted Red Pepper Bruschetta and Bruschetta with White Beans, Roasted Garlic, and Rosemary.