As one would expect there are certain things that are tricky to find for an expat in Thailand.  However, the things that are tricky to find are not the usual peanut butter types of things that you often hear about not being able to find in new countries.  Peanut butter is a piece of cake.  But we’ve spent a sort of shocking amount of time looking for things like mouthwash that tastes decent, potting soil, and the ukulele that now sits in our living room. We are fortunate because Bangkok is a huge international city, so it’s not usually food-related things that we have a hard time tracking down.  When we want a burrito or a hamburger we can find a place that makes one.  They even sell Greek yogurt at our local grocery store.  We don’t often have a food craving that we can’t satisfy.  Unfortunately, many of these items are not quite the same here in Bangkok as we remember them being back at home.  Lots of familiar things tend to be a bit more…well…over the top.  Donuts for example.  They are frequently drowning in a pound of M&Ms, six kinds of icing, and a scattering of mini cookies. And then there’s the pizza.  It seems like the pizza companies in Bangkok are constantly trying to out-do one another with crazier dough, cheese, and meat laden items which, I would argue, really don’t resemble pizza at all.  For further evidence of this fact see this post in Not the Nation.  In fact, the odd creation featured in this article (what appears to be pizza surrounded by pigs in a blanket dripping with cheese) is so popular that it caused a proprietary battle between Pizza Hut and The Pizza Company (both of which have their own version of this odd combination). Most of the pizza is so terrible that we find it best to take matters into our own hands.  Ever since we figured out that our pizza stone will fit in the oven if wedged in at the very bottom, we’ve wanted to have people over for pizza.  On Friday we made it happen and had a great time with friends and an easy dinner for a crowd that was great fun and produced so few dishes that even our dishwasher-free kitchen could handle the mess.  Not to mention that our friends brought tasty drinks and desserts to round out the meal.  We’re already planning the next one. 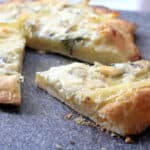 I like to make the dough two or three days before making pizzas. As noted below, after the dough rises it can be punched down and refrigerated for up to three days. Just bring it out and allow it to come to room temperature before rolling it out into pizzas.
the pizza dough in this recipe is adapted from this Food and Wine recipe