Eating gougères makes me think of indulgent things – fancy dinners, good wine, Paris.  Frank and I have been to California wine country twice.  Both times our mutually favored vineyard has been a small, family-run spot in Napa – Robert Sinskey.

I love their wines, and the experience is made far more fun because they pair all their wines with little bites of food.  On our honeymoon in Healdsburg, we joined the Robert Sinksey wine club.  Every month a box came with two bottles of wine and recipes for pairing.  Every month it was like we were there all over again.

This was one of the Sinskey recipes, and I’m surprised it took me so long to make it.  The mere mention of these gougères by my Mom around Christmas this year had me thinking up an excuse to make them myself.

After a round of making gougères, I can’t think of any reason not to have them frozen and ready-to-go at any given time.  Who doesn’t need flaky, golden, cheese-filled puffs at their fingertips?

Despite seeming wildly fancy (I swooned over a hot basket of these in an restaurant in DC years ago), the fact that they can be baked straight from the freezer makes them shockingly convenient. I have to say that I doubted the claims that the freezer-to-oven method would really work, so I put it to the test last week.  Weeks ago, Frank did the cooking, and cranked out a bag of fragrant gougère dough in a matter of minutes.  We baked a few right away.  They were divine – light pillows, with flakiness on the outside and a soft airy center.  They disappeared fast, and we found ourselves simultaneously reaching for the last one.

Which brings me to this week, when, in an attempt to do a bit of a freezer clean-out, I came across the frozen gougères and remembered my initial curiosity.  Would these really be as good as the original batch?

Here’s the thing.  They were better.  Somehow the fact that they went from frozen solid directly to the hot oven just enhanced the contrast of the crispy shell and the tender insides.

Just remember to grease the pan well – those frozen gougères stuck to the pan like crazy. Now that we’ve depleted our stash, I will absolutely be re-stocking it soon. 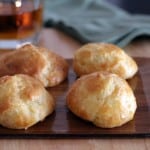 Recipe by Maria Sinskey, shared by Food and Wine. Note: The original recipe calls for 40 minutes of initial baking time at 450 degrees before reducing the temp until these are done. I found that my gougeres got puffy and golden long before that point and needed to be pulled out after just 30 (25 minutes at 450 and 5 minutes after reducing the heat to 400), which is what I’ve included in the recipe below. This may just be due to my unpredictable Thai oven, but keep an eye on them the first time you make them. In any case, I imagine it is hard to go wrong – once they become golden and crisp on the outside, I see no way for them to be anything but delicious!