I thought I owed my husband a dinner that fell firmly on the side of things that he loves.  In true Irish-form, most of his favorites include potatoes.  (In this particular recipe, bacon and butter are added bonuses.)  In truth, he’s always oh-so-good to me, but over the past couple weeks I realized that he has been extra tolerant, allowing me to indulge in unlimited control of the television in order to observe this event that took precedent over all other “actual” news in the world and indulging me in endless complaining about my humidity-crazed hair.  (The second matter was finally resolved, as I gave into spending several hours with my head coated in Brazilian Keratin goop while allowing stylists to flat-iron it into submission). I believe that after one bite of these super-easy, loaded smashed potatoes, he forgot all about the royal wedding and the hair-drama that comes with living with this girl. Now that I’ve distracted him with buttery, cheesy, bacon-topped potatoes, I am thinking I may be able to nab the remote and sneak in a bit of  this…and, if I’m extra sneaky, maybe even a bit of this.

Frank has already requested that we have this dish for a second time in one week.  Come to think of it, I may need to run out and get more potatoes…. 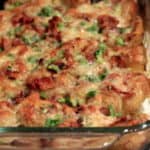