Sometimes I get an idea in my head, and get pulled in to looking for the precise recipe that will live up to all the expectations of that original idea.  This quest for “the” recipe can, at times, be all-consuming.  And when I say all-consuming, I don’t just mean for me.  Many a night, Frank twiddles his thumbs patiently for a delayed 9pm dinner while I hunt for “the” thing.  This recipe that follows is an example of a very rare situation in which the finished product really did turn out to be “the” thing I imagined.  It was not even one that I intended for the blog, but it is too irresistable not to share.

I started looking for this recipe as something to bring for a team meeting at work.  In Thailand, snacks at gatherings are fundamental.  Never have I been to a meeting in this country where I wasn’t offered at least coffee or tea, usually served with something to eat.  Even though I read about it before I moved to Bangkok, it didn’t take long to become indoctrinated to the snackish way of doing things.  At every hour of the day, vendors line the sidewalks offering bit-sized snacks to much on.  In the mornings I make my way down the gauntlet of snacks on my street, reminding myself that the last thing I need is a bag of fried dough, a banana crepe, or deep-fried sour rice sausages (my absolute favorite) before I’ve even reached my office.  So when we agreed that we needed snacks at our monthly meeting, I offered to be the first contributor, and one thing came to mind.  It wasn’t a particularly unique snack, but I just couldn’t shake the thought of it. Frankly, I’m not brave enough to make a Thai-style snack to serve to my Thai colleagues (I’m way out of my league there), but I felt confident that I could bake something for the early morning meeting that would satisfy our entire crew, American and Thai.  Thus ensued an internet hunt that stretched out over an entire week.  What I wanted was a two-bite not-too-sweet cinnamon roll recipe with brioche as the base.  I wanted tiny swirls of cinnamon wrapped in a light, buttery dough.  I wanted these to be easy to pick up, easily transported (in Bangkok, all treats must be public-transportation friendly), and most importantly, delicious.  I had started to lose hope that “the” recipe existed, when I stumbled on this discussion at The Fresh Loaf  that saved the day.  Many thanks goes out to “Joe V” who left awesome instructions and pictures within that discussion.  The recipe below is adapted from the recipe he generously shared.

And how did the cinnamon brioche pinwheels (as I decided they should be called) go over at the staff meeting?  Judging by the empty plate, free even, of crumbs, they were an enormous hit.  It was impossible to eat just one.  Fortunately their diminutive size made that easy to justify. If you are a perfectionist looking for miniature cinnamon rolls made with a brioche dough (there must be others out there), save yourself a few hours of searching and make this addictive recipe.

And, for another sweet breakfast bread (although definitely not bite-sized) I would also highly recommend these No-Knead Pumpkin Rolls with Brown Sugar Glaze. 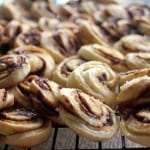 Note: I baked most of these immediately, but froze a few to bake for breakfast this past weekend. To freeze, make the recipe all the way through the step where you slice the rolled logs of dough into ½ inch slices. Place the slices on a parchment paper-lined baking sheet and freeze for at least an hour. Pop the frozen pinwheels off the parchment and freeze in a plastic bag until ready to bake. When you take them out of the freezer, place them on a lightly greased baking sheet and allow to come to room temperature before proceeding with the recipe to brush with egg, top with sugar, and bake in a 375 degree F. oven.