I am fortunate to have an oven, however small it may be, in our apartment in Thailand. It is somewhat rare to have an apartment with an oven in Thailand.  In this hot country, the style of cooking is fast, over high heat on the stove.  Before we moved here, I recall saying “eh, it’s okay if there’s no oven – I’ll adapt”. And certainly, I would have....if forced.  But, despite my ever-growing love of wok-cooking, I would have been a bit sad without our little oven and its vegetable-roasting abilities. In my opinion, most vegetables rarely need more than a bit of olive oil and salt/pepper love before a good roast. Such is the case with my standard, weeknight roasted cauliflower. Sometimes though, we like to fancy things up a bit,  and I use a roasted vegetable as a base for something that is so much greater than the sum of its parts. This recipe below - it is absolutely that.  This easy side dish is greater than the sum of its parts. This very well may be the best cauliflower I have ever had. And that’s sayin' something. 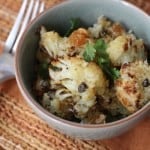